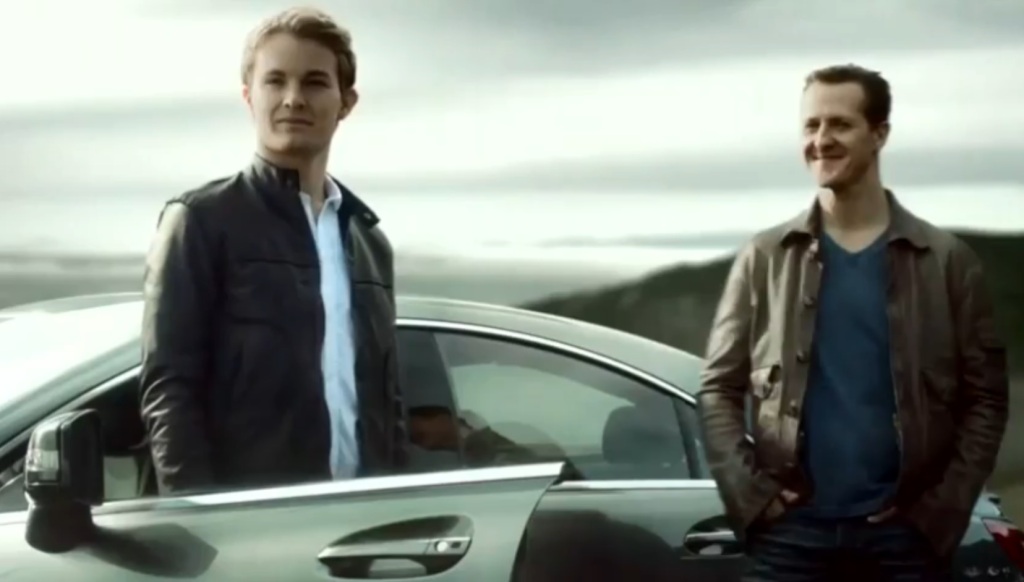 So... imagine your wife is pregnant and you're hurrying like hell to take her to the hospital. At one point, your car breaks down and you have to park it on the side of the road and figure out what's wrong with it, while the screaming in the car not only doesn't stop, but develops into an uncontrollable pressure that's making you go mad.

Salvation comes from a CLS 63 AMG that's approaching the area, and whose driver is also willing to stop and give you a hand. And if you see Nico Rosberg get out of the car, you think you died and went to heaven, because there would be no one in this world to take you faster to a hospital than a Formula 1 driver passing by.

But then a second Mercedes comes to play, an E 63 AMG driven by Michael Schumacher. And now you have a dilemma. Who are you going to choose, a 7-time world champion (that would be the logical choice, but the man has just gotten himself used to driving an F1 car again after 3 years of absence) or someone who is clearly the fastest Mercedes GP driver at the moment?

Not that easy, is it? Well, it wasn't like that for the couple in the video below either, although we'd argued that a real life situation like this would see the women get into the first car at sight and rush to the hospital as quickly as possible.

OK, enough talking, we're going to let you enjoy the latest Mercedes-Benz ad featuring its two Formula 1 drivers in a minute. One more thing though: How hot is a pregnant woman that knows her F1?