2 California Cops Hand Out Cash to Drivers, Instead of Tickets

5 Swiss Police Confront Stormtroopers Over Illegal Parking, Might Allow Trekkies
Up Next

Prankster Drives Flooded Ford Laser in Viral Video, Goes on Trial for It

Home > News > U-turn
Elena Gorgan
One Australian who received worldwide recognition for his creativity and the apparent willingness to risk his life to showcase it, is now facing the music for his actions. Having built what he called “the world’s first underwater car,” he’s on trial on various driving charges.
11 photos

Michael Alexander Phillippou runs the RackaRacka channel on YouTube with his identical twin brother Danny. In January 2019, Michael and his team build a flooded car as a way, they said, to fight the heatwave sweeping Adelaide.

They modified a Ford Laser and moved all the controls on the outside, thus being able to flood it with water up to the roof. Michael and Jackson O’Doherty jumped inside and Michael drove the car to a nearby store / gas station, from where they purchased a couple of beers. They drank the beers inside the flooded vehicle, aka the “world’s first underwater car,” and then drove off.

The entire stunt was captured on camera and posted to their YouTube channel. There alone is has over 1.2 million views as of the time of writing, but ABC.net says that it got several million more on other channels that shared it. Put it differently, the video was a viral hit.

While people from all over the world applauded the creativity and humor of the team behind the car mod, Australian police were far from impressed. Nearly one year later, the police finally caught up with Michael and arrested him. They also arrested Danny for trying to pass for Michael, but charges against him were later dropped.

Michael’s weren’t, and he was in court on January 15 to answer to them. He’s been charged with reckless driving and driving in a dangerous manner, driving an unlicensed vehicle, driving without a seatbelt – but not with drinking and driving.

Outside court, Michael said he was hoping for a non-conviction, even though his entirely family showed up to see him off to jail. He was also greeted by his supporters, of whom he has many: the same media outlet notes that he was one of the top influencers in Australia in 2019.

All legal shenanigans aside, the modifications on the Ford were outstanding. The car weighed over 4 tons with the added weight of the water, but was still somehow able to make it all the way to the store despite the strain on the suspensions and leaking water. Meanwhile, Michael and Jackson wore scuba-diving gear as they waved to pedestrians, and removed it only once they arrived at their destination.

Here is a video of the impressive (albeit illegal) engineering feat.
*Warning:
Please note that the footage contains graphic language that may offend. 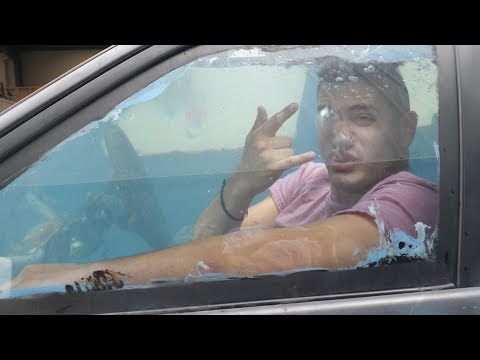