2 Ferrari Roma Virtually Grows Into a Stylish Sedan, Should Porsche Be Scared?

Aurel Niculescu
BMW is having a blast this year, with everything revolving around the white-and-blue coat of arms, from Formula One rumors to a major M GmbH anniversary, and a lot more.
28 photos

Sure, controversial styling decisions are always the talk of the town when it comes to the recent dealings of this Bavarian automaker, but at least some models are safe from making diehard fans run amuck crying their outrage. For example, the next-generation 5 Series executive car is quite traditional in terms of styling, and even its upcoming, bonkers M5 sibling will cause little complaints. Phew, that was a close one.

But how about the current iteration of the 5 Series (G30/31), doesn’t it deserve a little farewell love of the M5 variety, as well, even if only digitally? As it turns out, the virtual artist better known as Theottle on social media, has decided to tempt our imagination with the thought of an executive-class station wagon revival again going down the crazy twin-turbo V8 route, and we are all in for that kind of a wild treatment.

His latest behind-the-scenes making-of video (embedded below) starts rather tame, with an unsuspecting BMW 530d G31 station wagon donating its elongated five-door format to the still-mighty F90 BMW M5. Even better, it is soon revealed that the green hoot is actually the latest and greatest evolution, a BMW M5 CS. Well, that sure has the makings of a practical yet entirely frightening M5 (CS) Touring that could obliterate the track while carrying the entire family and its vacation luggage!

Too bad it is merely wishful thinking, and BMW will not have the M5 and M5 Touring tandem in real life, just like it is the case today with the M3 sedan and M3 Touring. Still, we can dream of feisty station wagon adventures with 626 hp, four bucket seats, and a bucketload of smiles on everyone’s faces, right? 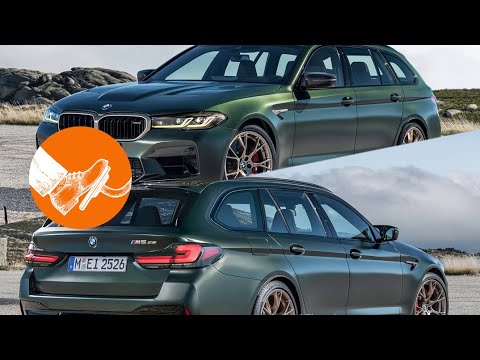