1 1970 Ford Camelot Cruiser Motorhome: The Most Luxurious and Insane RV of the Decade

4 Adria Astella: Still the Ultimate Luxury Dream Home, Wherever It May Be That Day

As they say, if you want something done, you’d better do it yourself. More than 20 years ago, Doug Tolbert wanted an RV that could haul all his toys and provide all the comforts of a home for himself and his family, so he set out to build it himself.

Since then, Doug Tolbert has spun that first build into a very profitable business and the reputation of being one of the few mega RV builders in the United States. In fact, Google “Mega RVs,” and his name is among the first to come up, thanks to the Powerhouse Ultra Line RV, his most famous rig.

The Powerhouse Ultra Line RV is named this way because, as Tolbert himself explained in an older interview, “it’s a house on wheels and it has lots of power.” “It really was a natural name,” he adds, pointing out the obvious.

The Powerhouse Ultra Line RV is just one of the many custom rigs Powerhouse Coach, Tolbert’s company in Iona, Idaho, builds. It’s a class 8 truck conversion that hauls a trailer AND a boat trailer, so that it becomes a monster, 122-foot (37.2-meter) land train of the kind you’re unlikely to see from any other company – a point Tolbert takes great pride in. But perhaps the hottest selling point of such a rig is that it’s fully customizable and, because of it, affordable.

This is probably the first time you’ll find the word “affordable” used in connection to such a rig. By comparison to similar mega RVs, this one could be seen as affordable. It’s not cheap by any means, but it is slightly more affordable than the multi-million rigs from other companies.

Powerhouse Coach actually offers two models of the Ultra Line, one introduced in 2003 and the 2007 model, which is also the owners’ factory demo unit. The RV itself doesn’t include the trailer, so it’s a 52-foot (15.8-meter), four-slide unit that can sleep as many as eight people in total comfort, and offers more than 400 square feet (37.2 square meters) of interior space.

The trailer can be either a 40- or 35-footer (12.2 or 10.6 meters), self-propelled and remote-controlled, heated and air-conditioned, and finished inside in whatever way suits the owner’s needs: a toy hauler for several cars, a separate sleeping unit with six bunks and living amenities, or anything in between. As they say, sky’s the limit, if money is not an issue.

The rig that has literally gone down in history, the one shown in the photos in the gallery and the video at the bottom of the page, is a whopping 122 feet (37.2 meters) long in total, because in addition to the trailer, it also hauls a boat trailer. As Tolbert laughs, if you get where you’re going and you don’t have all your toys with you, you can’t really have too much fun. It’s hard to disagree with that.

The 2007 unit is finished with a rustic decor that was probably stylish at the time but come across as dated now. It is expensive nonetheless: real wood for the doors and finishes on the furniture, granite countertops, and quality fabrics. Bearing in mind that Powerhouse Coach can do whatever you want to the interior, take this unit as what it was designed to be: a showcase of what can be done inside a moving house.

And what a house it is. Right behind the cab, before you even step into the main living space, you get two bunk beds, an office and a lounge area, and you could sleep three or four people here. The main living space includes another massive lounge area, with two couches facing each other and a complete kitchen setup. In total, the Ultra Line RV has four slide-outs, which expand the main areas considerably, offering a very residential feel. That said, the areas remain functional even when the slide-outs are not deployed.

At the rear is the master bedroom, with a king-size bed, an ensuite bathroom and a ventilated laundry room with a washer and dryer, and a rack for clean clothes. Storage space is impressive, from overhead cabinets to full-size wardrobes and drawers integrated into furniture. Additional storage is available outside, from the basement where the AC unit resides to storage for garden furniture and barbecues.

The rig has eight cameras, with two more on the self-propelled trailer, an entertainment console rigged to several TVs across the various rooms, and smart features in the cabin for enhanced safety on the road, even in worst-case scenarios. According to Tolbert, because it’s based on a Class 8 Volvo truck that is designed to travel the highways instead of staying put for extended periods at camp, the rig is safer than a standard RV.

Moreover, Tolbert says, you’re looking at a rig that’s still affordable because you could finance it like you would a house – the kind that doesn’t move and is, because of that, less fun.

Tolbert says prices start at $250,000 for a truck conversion and go well over $900,000 for a unit like the one he shows off in the video, with the entire process taking between six and eight months. Powerhouse Coach makes some of the most outrageous rigs in the U.S., but it remains a small, mostly family-run operation, so the turnout is of about one rig and a half in a year. Just in case you needed to add “exclusivity” to the long list of highlights for this monster RV. 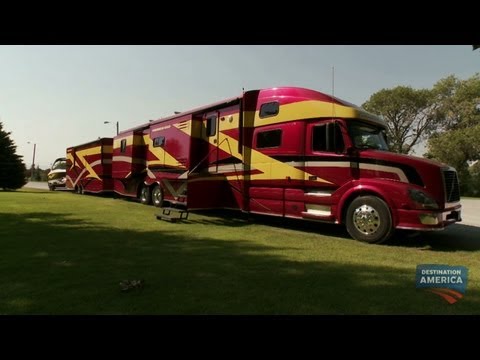