2 Meet the Waiter of the Future. KettyBot Is Smart, Funny, and With Impeccable Manners

Home > News > Technology
Cristina Mircea
When it comes to exoskeletons, researchers have mostly focused their attention on creating devices for people with motor disabilities, helping them walk easier or faster with the help of robotics. But Atoun’s Koma 1.5 is a small powered suit designed for heavy-duty.
6 photos

The Koma 1.5 is meant to help the wearer carry heavy objects while also reducing stress and strain on the body. With its two robotic legs, this device is useful both on flat, non-inclined surfaces but also for climbing stairs.

It has two operating modes that help it adjust accordingly: a Buggy mode and a Two-Legged mode. In the former, the Koma suit can help you move using its four motorized wheels that are lowered, while you hold on to its arms.

If you reach an uneven surface such as stairs that you have to climb, the robotic system acts as a true transformer at a single push of a button. It retracts its front wheels and it becomes a two-legged machine that follows the wearer’s legs.

In addition to its two-mode feature, the Koma 1.5 is also equipped with a built-in camera and artificial intelligence so that it can safely avoid potential obstacles in its path.

For now, the heavy-duty powered suit is just in the prototype phase, with the website specifying the machine is “under development”. There are no details regarding a production date or price.

This is not the first such machine developed by the Japanese company, which describes its mission as one of making a world where humans can have more physical freedom by wearing robots. Atoun already produces its Model Y robotic suit which is designed to alleviate the burden to the waist when the wearer is lifting heavy objects.

The Model Y suit comes with powerful motors and sensors that detect the movements of the waist. This one also has multiple modes: an assist mode, brake mode, and walk mode. Atoun’s wearable robot resembles HeroWear’s Apex back-assist exosuit. 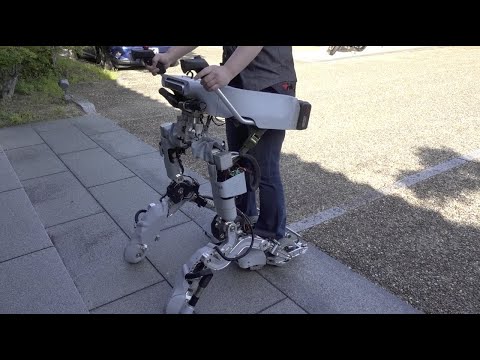