5 1956 Chevrolet Nomad Comes Out of Storage, Needs Engine and Transmission
Car video reviews:
Up Next

Waze Joins Forces With Another City for Real-Time Traffic Information

A man’s lifelong passion will continue to bring delight to fellow car enthusiasts one year after his passing. The name Bernie Larson might not ring a bell, but his collection of Pontiac Trans Ams and other Pontiacs is perhaps one of the most impressive barn finds in a long while.
26 photos

Bernie Larson was a U.S. Navy vet and postman in Tonganoxie, Kansas. He first fell in love with Pontiac after the first drive in a Pontiac Judge, but he only turned legit collector after he retired. His collection, stored in three separate barns in Kansas, is just now being brought to the attention of the public after his family decided to part ways with most of it. Bernie died last year, and the Pontiacs would be better off in more loving hands.

Offered by Van Der Brink Auctions, the collection includes mostly all-original and unrestored vehicles, more than 20 of them. It also includes hundreds of parts, but these will only be sold on-site, in person. The vehicles are up for online auction on June 12, 2021, as part of the Kansas Collection or Pontiac Hoard.

And what a fitting name the latter is: a muscle car lover could have a field day here. The collection includes several Trans Ams, several Firebirds, a couple of 10th Anniversary Trans Ams, a ‘74 Super Duty, and an Esprit. The vehicles are either in need of some light TLC or qualify as full-blown project cars, as the video at the bottom of the page and the gallery above will confirm.

“Bernie was a life-long golfer and fan of Royals baseball,” Bernie’s obit reads. “He was known for his interest in Pontiac muscle cars and was a huge animal lover, especially his feline family members. His interests also included a love of history, mainly regarding ancient Egypt and WW II, and general mischief.” It sounds like Bernie was awesome.

The listing with the auction house delves a bit deeper into his interest in Pontiacs, saying he spent years collecting, working on and trading muscle cars. He was also a fixture at “swap meets and looking for cars,” which explains the equally impressive hoard of Pontiac parts. 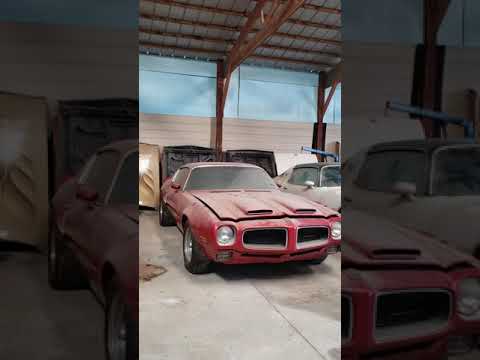