5 GM to Offer Internet Access In Most 2015 Models Sold in US, Canada
Car video reviews:
Coverstory

Wait, wasn’t that supposed to be Facebook’s game? Well, yes and no. Yes, Mark Zuckerberg did just announce their first internet-beaming drone successfully ended its first test flight in UK. And no, it’s not the only company working on flying unmanned aircraft that will end up providing internet coverage to remote areas. Google would be another one, and more recently so is Quarkson.
8 photos

But who is Quarkson? It’s a Portuguese company whose facility is located in Barreiro, Portugal, just 30 minutes from Lisbon’s International Airport. The IT research company’s mission apparently is to create, deliver and maintain advanced multi-mission, multi-purpose UAVs capable of parking various payloads in low and high altitude atmospheric orbits.


One of their most important projects is the SkyOrbiter LA25 platform, a device that was designed to stay in low atmospheric orbit for prolonged periods. It can be used for a wide range of commercial and government applications. The team is currently testing Wi-Fi-transmitting equipment that can provide internet access to local users on the ground via a patch antenna. It appears the drone’s first successful test flight took place on April 2. An internet-beaming drone flying low
The one in question was a small version of those planned for eventual use with a wingspan of 5 m (16 ft). It was flown within line of sight up to an altitude of 330 ft (100 m), and successfully relayed a Wi-Fi signal to the ground. Similar to what Facebook’s drones, the Portuguese models are designed to be fully autonomous with an energy management system, autopilot and ground control software, and long communications working on different frequencies.

The high-endurance aerial system is able to operate 24 hours a day, 7 days a week and is estimated to be over 100 times less expensive that terrestrial communications network deployment. Since the Portugues government has not yet allowed them to fly the full-scale model, they have only tested smaller drone so far.

On thing is certain, judging by the way things look so far we’re most likely about to see some big changes on the internet market in the near future. 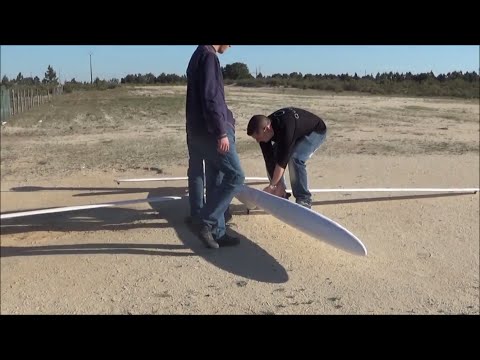