4 Will Smith’s Gigantic $2.5 Million RV The Heat Is Now Used for Unglamorous Glamping

If you've ever been glamping, camping, or other mobile living, you know just how darn hot it can get inside a habitat. Since we live in a modern age, numerous manufacturers are coming up with solutions for keeping things cool. Such is the case with EcoFlow's Wave.

Folks, if the name EcoFlow rings some bells, it's because we've featured some of their work before. They saw their beginnings in 2017 and since then have grown to be known for one thing, battery-driven power, in all its shapes and forms. The point of it all? Simple; to help you live your life off the grid. However, their systems can even go as far as powering a full-blown home.

This time around, EcoFlow isn't focusing on being a source of power for your home or camper but a source of comfort; the Wave is nothing more than a portable AC unit. Yet, things are not really that simple. This thing is chock-full of tech designed to help it stand out from the other mobile AC brands, and part is based on EcoFlow's knowledge of battery systems.

Now, I mentioned that this bugger is a portable system and that alone should give you some insight into how it functions and even how it may be designed. Just as you might expect, Wave can be carried in hand, stowed in the trunk of your car, and even slipped into some camper storage bay. All that's possible because EcoFlow aimed to build a unit as small as possible, with an overall weight of 38.6 lbs (17.5 kg).

If you know the saying about big things coming in small packages, Wave may just be one of the trinkets that sustains this proverb. I say this because as small as this unit may be, it can still pump out 4,000 BTUs of cool air. According to the manufacturer, it's enough to bring the temperature down in a 64-square-foot (6-square-meter) space from 86 degrees Fahrenheit (30 Degrees Celsius to 75 Fahrenheit (24 Celsius) in 8 minutes (in optimum conditions). Oh, and if your unit operates in spaces where the humidity is under 70%, you won't find any water next to your sleeping bag when you wake up in the morning.

One issue you may face while out and about off-griding is having to recharge. Did I say issue? I meant NO issue! With the ability to sap energy from your home, car, solar, and even use multiple batteries, it sounds like the only thing you'll need to worry about is waking up to a bear escaping the afternoon sun by chilling in front of your Wave.

Yet there seems to be a catch, which may actually be a benefit in the long run; Wave requires a battery to function off-grid and is sold separately without one. Sure, there are bundles that also include a battery or other EcoFlow gear, but the base Wave is as bare as an RC car you buy from the toy store. Nonetheless, future owners can be looking forward to a runtime of up to 8 hours (under specific settings) with the most extensive pack available. Continuous cooling last around 6 hours, or 12 with another battery.

Actually, with another battery, it seems that you can cycle through charged and depleted packs and keep this bugger running nonstop; while using one battery, you can recharge the other by solar power or other means. However, it is unclear if the Wave is designed to keep running round the clock. I don't see why it shouldn't, at least during the hotter months. As a final touch, controlling the Wave with nothing but your phone is also possible.

As for the question on everyone's mind, this bugger will run you $1,200 (€1,100 at current exchange rates) without a battery pack. You will need to throw in an extra $500 for a battery and car charger. You may think that's quite a bit, and it may be, but in comparison to other AC units, few are designed like the Wave and perform at the same level.

However, the manufacturer's website is now taking preorders for these suckers, and in the time that I wrote this article, the number of available units dropped by two. Seems like some people know what's up with these little trinkets. Camping in a fiberglass camper this year? Maybe you need an AC unit. 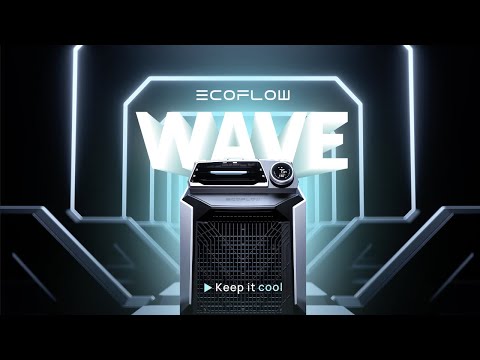