3 This $1.5 Million French Catamaran Was Named the Best Bluewater Cruiser of 2022

Elena Gorgan
Porsche is a brand with incredible, wide appeal for buyers without budgetary constraints. Even so, Royal Falcon One, a stunning catamaran that has been dubbed Porsche’s first megayacht, is proving a very hard sell.
23 photos

Royal Falcon One was delivered in 2019, and it’s been on the market ever since. Designed entirely by Studio F.A. Porsche and built by Royal Falcon Fleed and Kockums, on architecture by Incat Crowther, this catamaran is a stunning build with performance to match. It is technically Porsche’s first megayacht, but its second tagline is equally apt: it is a “spaceship on water.”

As it happens, it’s a spaceship on water that’s proving a very hard sell. Initially listed with a “price on request” in late 2019, it was still available in February 2022 after “several” millions were chopped off the asking price, listed at $26.6 million. Today, pricing has been reduced even further, and Royal Falcon One is asking $24.2 million. Hey, even multi-millionaires must love a good bargain.

With a total length of 135 feet (41 meters), Royal Falcon One offers an interior volume of 499 GT, which is usually found on mono-hull ships of a bigger length. Due to its twin-hull construction, it is decidedly faster and more stable than single hulls while also being more fuel-efficient.

Accommodation on board is for 10 guests across five cabins, with additional accommodation for a crew of 10. Royal Falcon One is lavishly appointed, with elegant interiors and generous outdoor areas for entertaining and relaxing. There is a jacuzzi on the sun deck, formal and outdoor dining areas, and sizable lounges, all furnished elegantly in muted tones, with the occasional dash of vibrant blue and yellows for contrast.

Perhaps equally noteworthy is the fact that this gorgeous cat is “in a brand new condition and has low engine hours.” 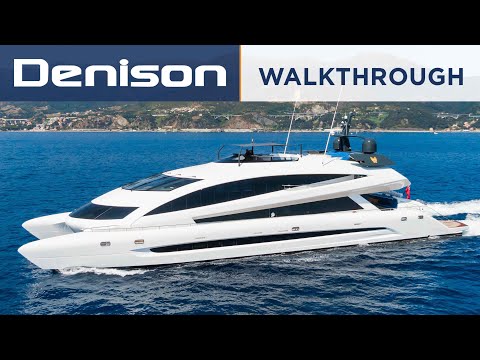