1 LaFerrari Found Hiding in a Barn Before Pebble Beach

4 Lamborghini Gallardo Replacement to Arrive in 2015

Home > News > Car Profile
Ciprian Florea
The guys over at Porsche are having loads of fun with “the latest production version” of the 918 Spyder at the Monterey Motor Week... and they’re bragging about it on Twitter.
1 photo
We can’t blame them though, we’d probably do the same thing if we had an example of their upcoming hybrid supercar at our disposal. Not that the Ferrari FF we tested recently is less of a performance machine, but this heat we’re experiencing calls for a spyder (if not a full convertible)...

Getting back to the Porsche 918, the German automaker had nothing to say about their recent Californian adventure, but we have a hunch that the vehicle depicted above is the same one you’re going to see in the video below. It was spotted in California recently by YouTube user BrianZuk, who says the vehicle had some damage to its front end.

Deliveries of the hybrid Porsche 918 will most probably commence next year. The vehicle will boast 887 HP and tackle the Ferrari LaFerrari and the McLaren P1. 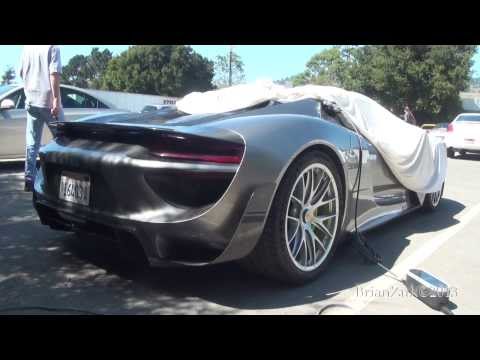