It looks like it's "go big or go home" season in automotive advertising these days. After we've seen GMC make the World's Biggest Tweet yesterday, now Porsche went and briefly turned the world's tallest building into its own personal billboard.
69 photos

The Burj Khalifa towers at over half a mile above ground level, making it the tallest building by quite a margin. Measuring 828 meters (2,716 feet), it sticks out from Dubai's skyline like a basketball center among kindergarten kids. Hell, even the next tallest building - the 632 meters (2,073 feet) tall Shanghai Tower - would still look like a shooting guard at best when placed next to it.

Luckily for Porsche, the imposing structure has over one million LED lights covering one of its sides, thus providing the largest single display surface in the world. That meant all the German manufacturer had to do was to come up with a short animation clip tailored to the unique shape of the building.

Porsche found the perfect occasion for this extravaganza: the official launch of the Taycan, the brand's first all-electric production vehicle, on the Middle East market. Naturally, the whole animation had an electricity-related theme, starting with a charging sequence.

"Every Porsche ever built has a soul", read the text. The clip then proceeds to list some of the most emblematic Porsche models in the company's history, beginning with the Lohner-Porsche from 1900, and continuing with what a lot of people consider to be the first modern Porsche, 1948's 356 model. Next was undoubtedly the most iconic model of all: the 911, launched in 1963.

How can you follow that? Well, Porsche seems to think the 2013 918 Spyder is a good choice, and that's definitely hard to argue against. One year later was when the 919 Hybrid came along, and since this whole thing is about electric vehicles, a successful racing model that uses battery power could not have missed from the list.

With those out of the way, it was time for the evening's main guest to finally make its appearance as the text on the huge display was urging everybody to "get ready for the first all-electric sports car with a Porsche soul". But reading about the event doesn't really do it justice. Neither does watching it on a mere phone or laptop display, but at least it's one step closer to the real deal. 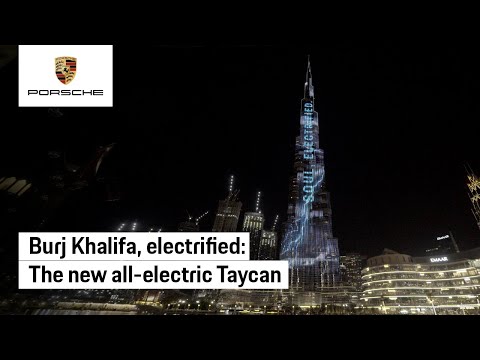