The cars in the headline may not be direct rivals, but nevertheless, Roman and Tommy Mica from The Fast Lane have tested all four in a series of drag races. The question is, which is the quickest car in a straight line?
23 photos

As expected, the MINI Cooper SE doesn’t have a chance against the Volkswagen ID.4 with the dual-motor setup. Twinned with the BMW i3, the quirky hatchback needs 6.5 seconds to 60 miles per hour (97 kilometers per hour) at the IMI Motorsports Complex that’s just north of Denver. If you ask me, it’s pretty alright for a relatively affordable vehicle ($29,900 sans the federal tax credit) that flaunts just 199 pound-feet (270 Nm) of torque.

Next up, the ID.4 levels up to 339 pound-feet (460 Nm) and 6.42 seconds. Currently listed from $39,995 excluding the $7,500 federal tax credit, Volkswagen’s electric utility vehicle is available with all-wheel drive for an extra $3,680 that also includes a heated windshield as well as a tow hitch.

The Ford Mustang Mach-E tested by The Fast Lane is the uppermost grade, the GT Performance Edition, that costs a whopping $64,995 excluding destination charge. That’s almost $30,000 less than Porsche asks for the dual-motor Taycan 4 Cross Turismo, which offers 469 horsepower as opposed to 480 horsepower and 368 pound-feet (499 Nm) as opposed to 634 pound-feet (860 Nm). You can already tell from the peak torque figures which is the quicker car, but still, 4.85 seconds for the Taycan is more than simply impressive for the most affordable version of the Cross Turismo.

Toward the end of the featured video, you’ll see Roman trying to match Ford’s claimed acceleration figure of 3.5 seconds in the Mustang Mach-E GT Performance Edition. The pony-branded SUV doesn’t want to dip into the 3-second range at all, most likely because full output is available for only 5 seconds at a time before the software intervenes to limit heating. 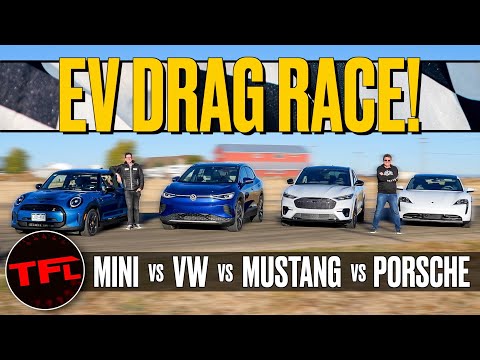