This 1970 Dodge Charger Daytona Tribute Is a Vitamin C Overdose

For much too long the Tesla Model S, at first, and then the Models X and 3, were the only electric vehicles out there with dynamic performances worth mentioning, but once Porsche got involved, that area was clearly going to get a bit more crowded.
1 photo
The German manufacturer has plied its trade for so long in the internal combustion engine universe, and at least up until the launch of the Cayenne SUV, its name was synonymous with sportiness and performance. Hell, it even made the whole idea of a sporty SUV bearable, even though people would still need a few years to digest that.

As far as EVs go, Tesla has already paved the way in that sense, so the world is more than ready for quick battery-powered cars. Actually, you might even say every new electric car is expected to perform above what is normally associated with regular vehicles in its class. A small motor-driven city car? It’d better be quick to reach 30 mph or else it'll catch rust in the dealerships.

With a maximum power of up to 761 hp (with launch control) and 774 lb-ft of torque (1,050 Nm), even its horrendous weight isn't enough to put a dent into its performance figures: a conservative 2.8 seconds for the 0-62 mph (100 kph) sprint and a top speed of 161 mph (260 km/h). Both specs can be witnessed in the video below and we'd recommend using a good pair of headphones because the sound is almost literally out of this world. Well, it's out of the ICE world, for sure.

The figures offered by the tester's GPS device confirm Porsche's numbers, which is a bit surprising if you consider the German company's habit of under-selling its products with worse than actual performance data. However, the 0-62 mph is largely confirmed (2.84 seconds in this case), with the 124 mph (200 kph) mark taking just over 10 seconds, and the top speed of 161 mph an extra nine. Not bad at all, and if this has opened your appetite for some Taycan action, why don't you check out this track battle against a 2020 BMW M8 Gran Coupe. 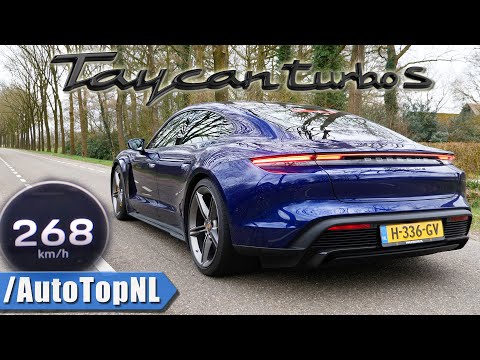