Here is the one we've been waiting for. Ever since the news of Porsche readying a sporty four-door electric saloon came around, everybody had just one thing on their minds: to pit it against the undisputed EV king of the quarter mile, the Model S P100D.
1 photo
With the first serious competition on the horizon, Tesla didn't remain idle. It released an improved launching mode called the Cheetah stance - cheesy, but it gets the message across - which uses the air suspension to position the vehicle, so it maximizes grip during take-off.

This upgrade comes to complement the new Raven motors available on the Long-Range and Performance versions of the two larger Tesla models. What the Palo Alto-based EV maker did was take the rear motor of the Model 3 Performance and replace the old one sitting at the front of the Model S and Model X for their respective range-topping variants. According to official figures, the 2020 Model S P100 Performance with the Cheetah stance enabled will do 0-60 mph (0-97 kmph) in just 2.3 seconds, which is another way of saying "holy molly."

If we're to stick to numbers provided by the carmakers themselves, then racing the Porsche Taycan Turbo S should be a pretty closely fought affair. The Germans claim a 0-62 mph (0-100 kph) time of 2.7 seconds for the top-spec Taycan Turbo S, but Porsche has a history of understating the performance capabilities of its vehicles, so you never know.

Sadly, though, this race doesn't feature precisely the cars we would have liked to see. The Porsche ticks all the boxes, but the Tesla is "only" a 2019 P100D model, which means it doesn't benefit from all the upgrades above. However, it's still an interesting run to watch, made even more so by the slower reactions off the line of the Porsche driver.

The Tesla pulls away quickly, but it's quickly reeled in by the German once the two vehicles gain pace. We can't tell if it's down to the two-speed transmission setup the Taycan uses, but that would definitely come in useful during a longer half-mile race.

Plus, we can at least compare the times with that of a proper Raven Model S from a previous race we've shown you. In case you forgot, the Tesla pulled a 10.45 seconds quarter-mile run, enough to claim the record for quickest mass-production EV on that distance. Based on what we can see here, it doesn't look like it can pull it off, but that's still a savagely quick car and a hell of a first try by Porsche. 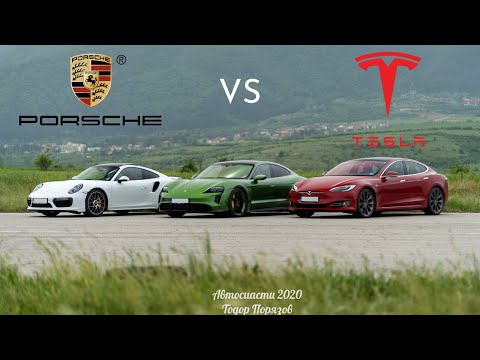