2 Porsche Taycan Turbo S Totaled with 15 Miles on the Clock, Sold for Parts

For years, the Tesla Model S (P100D with Ludicrous mode, preferably) was the go-to stock vehicle for squeezing the most giggles out of anyone with its acceleration.
1 photo
It was a simple enough recipe that relied mostly on the instant torque provided by electric motors, as well as very clever traction management that prevented wheelspin for maximum grip during takeoff. The result was a lot of people left flabbergasted by just how quickly a car that large (five full seats plus two optional jump seats in the back for a total of seven) and that quiet could reach triple-digit speeds, not to mention the 60 mph mark. That would be just over two seconds, in case you've been blocking everything Tesla-related over the past years in the hope it would all go away.

Not only did it not go away, but it also spawned another performance electric vehicle that has similar party tricks. Unlike the Tesla, the Porsche Taycan Turbo S only has four seats and no frunk (that's Tesla-talk for the front trunk, the place where other cars keep their engines), but it's got better craftsmanship inside as well as a racing pedigree that comes with a brand that is over 70 years old.

On paper, the Model S P100D with the Cheetah stance mode activated should beat the Taycan in a 0-60 mph acceleration test, but we don't seem to have a definite answer on which of the two is quickest in a quater-mile race. It seems like the Tesla should just edge it, but the American stands no chance on any longer distance thanks to the Porsche's two-gear transmission.

So, there's not much between the two in terms of performance, meaning the Taycan has no problem pulling the same type of reactions we've seen from Teslas over these past years. Even though, as the maker of this video (ThatDudeinBlue) says, most of the people you see in the clip have owned reasonably fast cars themselves. 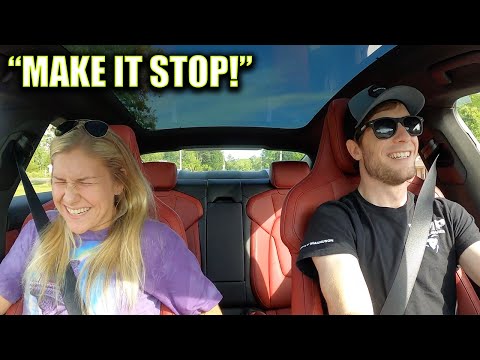