Because of the existence of EVs such as Porsche’s Taycan Turbo S, but above all the entire lineup of performance Teslas, people have grown used to forecasting them winning against ICE foes. But haven’t we talked before about not taking drag races for granted?
17 photos

Zero-emission vehicles may be as old as their ICE counterparts, but they have only become (sort of) mainstream over the past few years. The idea they might help save the planet was a great incentive. Though, we also suspect that for some people, getting a silent track and dragstrip ICE killer was even more arousing.

As such, we have grown used to seeing what initially seemed incomprehensible: hulking EV sedans beating top-notch traditional sports cars at their games. One of them would be the classic quarter-mile battle, so a user’s comment about the video embedded below was apparently sage: “I forecast that Taycan will win.”

Frankly, once we checked out the initial details of the race – Taycan Turbo S going against a Corvette ZR1 at a dragstrip in Mexico, we also got a little unsettled and almost didn’t hit the play button. But then a little race devil (and the “excellent race” description in Spanish) whispered: “why not, maybe you’ll get surprised.”

And remembering our advice to never take any quarter-mile skirmish for granted, we dived in. The good news is the author of the feature was correct; this really was a great engagement. But the outcome of the action was a bit unexpected, to say the least. Long story short, the C7 Corvette managed to walk all over its Taycan opponent. ICE took revenge on EV, if you will.

However, the details are also important. Although we have no background information about the drivers and their rides, we can obviously see the exact versions of the models involved. However, the driver skill can always impact the outcome, while “America’s sports car” might have also featured some aftermarket improvements... 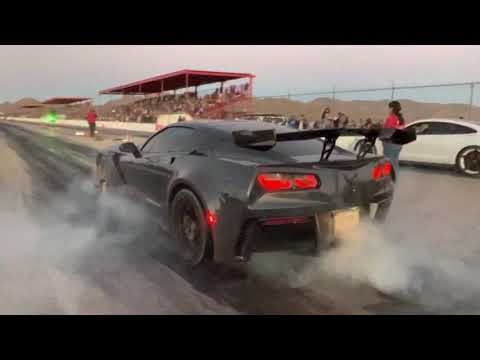