5 Is the Taycan a Magic Bullet or a Thorn in Porsche's Side?
Car video reviews:
Up Next

The Porsche Taycan is one of the hit cars of the moment. They got Will Smith to drive one for Lyft, the Super Bowl ad is really nice and it's the first EV that can truly challenge the Tesla Model S.
1 photo
We're not going to talk about how it costs twice as much or has limited range right now. But the point is, Porsche makes cars that go really fast, and it would be a shame not to race the high-end Taycan Turbo.

Porsche's idea of racing probably involves a nice, open track. But we all want to see the quarter-mile performance, as well as 0 to 60 times. These have already been covered in some casual and somewhat controversial drag races with the P100D, but for the most accurate numbers, you've got to go to Brooks from Drag Times.

He got both versions of the high-end Porsche EV, the Taycan Turbo and Turbo S. Neither of them has a turbocharger, but that's how Porsche indicates which is the faster, more expensive car.

As a quick reminder, the Taycan Turbo S is the flagship with a starting price of $185,000. That will get you 750 horsepower on quick bursts. It offers 774 lb-ft of torque and a range of 192 miles. Little brother Taycan Turbo makes only 650 horsepower, 626 lb-ft of torque will last for 201 miles. Real-world testing has shown they're much closer to 250 miles of range, though that's not the point of the story. 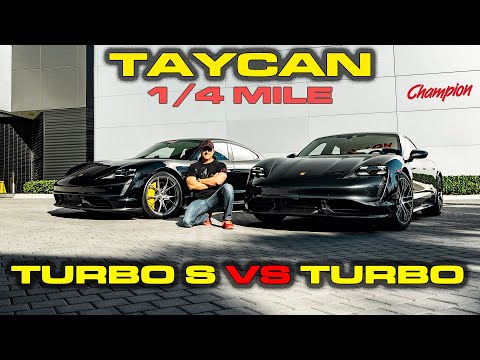