The station wagon/soft-roader version of Porsche's first fully electric model was supposed to launch, well, right about now, but the German carmaker just announced it will delay its market release for an unspecified amount of time.
18 photos

Wait, don't cancel your order for the Taycan - Porsche isn't going bankrupt. Actually, it's precisely that Taycan order you placed that's holding the Cross Turismo from reaching its future owners - that and the thousand others keeping Porsche busy in its attempt to meet them all.

During a recent interview, the Porsche CEO revealed that the Cross Turismo launch was pushed back for another quarter or so, meaning we should see it on the road in full production guise (not that this mildly camouflaged example rounding the Nürburgring is anything other than that) early next year.

Apparently, the demand for the Taycan sedan is greater than anticipated (a traditional carmaker underestimating people's hunger for good electric vehicles - can you believe that?) so Porsche is reshuffling its deck to make sure it keeps its customers happy. The company hasn't opened the books for the Cross Turismo, so while some people might potentially be upset about the delay, Porsche understandably prefers to focus on the certainties, not the possibilities.

But, anyway, what is the Porsche Taycan Cross Turismo? First of all, it won't cross anything higher than a few inches. Its name, as well as the fact it is based on the Mission E Cross Turismo concept car that featured a higher ground clearance, would have you believe this is at least a soft-roader. It's not. It's just what people who want a Taycan and also a bigger trunk buy.

Porsche hasn't transpired any technical details about the model, but maybe that's because it didn't feel like it had to. After all, this is a Taycan, so expect more of the same. Given the wiggle room left by the way they announced the sedan's specs (purposefully understating the range and performance), Porsche could very well fit the Cross Turismo within the same numbers. Whether the company decides to offer the sedan a slight advantage in figures or not remains to be seen.

What we can say now is that the longer roof and two-volume body style does nothing to hamper Taycan's undeniable visual appeal. There's a certain Ferrari FF air to it, even though the two models couldn't be further apart in every other aspect than their design. If the Taycan is doing so well that Porsche needs to delay other models to meet demand, assuming there's no significant dynamic penalty, we see no reason why the Cross Turismo would meet a different fate. 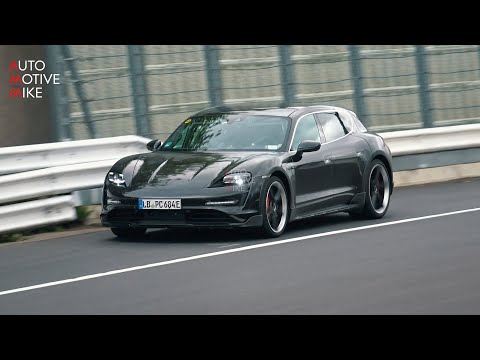