2 Mitsubishi Lancer Evo X Gets Some Digital Love, Along With Crazy Teleport Build

5 Porsche Pickup Has a Lot in Common With the Ranger/Amarok Duo, What Would You Call It?
Car video reviews:
Coverstory

Porsche Taycan Coupe Does Not Make Too Much Sense, yet Here Is a Digital 911 EV

Let us face it. Porsche has again demonstrated it can successfully get out of its comfort zone. So, after Cayenne and Macan SUV popularity, they are now riding the wave of Taycan EV popularity.
17 photos

Complete with four-door saloon, as well as double five-door Shooting Brake configurations. However, Porsche will probably feel there are enough body styles after deriving the latter both as a Cross and Sport Turismo. That means Cabriolet or Coupe transformations are probably not on the menu.

And that would be for an extremely specific reason. The traditional two-door sports car territory is the fief of its legendary 911 series. If they build a Taycan with just two doors, what will happen to their 911s when it is finally time to make them hybrids, PHEVs, and then fully electric icons? Clearly, Porsche needs to think everything through with a keen sense of what and what does not work in the long run.

However, virtual automotive artists never have such causes of concern. They can easily fire and forget any CGI “missile,” no matter how disruptive it may be. Case in point. The pixel master better known as SRK Designs on social media has seemingly fallen in love with EV transformations... with a side of Porsche.

Among the numerous EV digital projects of late, the CGI expert also transformed the current Porsche Macan into the upcoming zero-emission second generation. Alas, that one was not entirely wishful thinking. The German sports car maker has confirmed the EV switch for the second-generation luxury crossover SUV.

It is an entirely different case with a potential Porsche Taycan Coupe. We are fairly sure the German automaker’s head honchos have thought about that, just like other virtual artists. But we still feel that no matter how good a Taycan with just two doors looks, it is going to be sacrificed on the altar of future 911 EVs nonetheless... 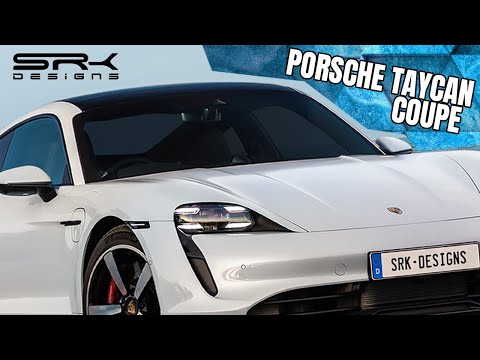