3 Porsche Collector Jerry Seinfeld Didn’t Like Porsches at First Because of Their L.A. Image

5 2022 Ford Bronco Raptor Has Barely Been Driven, Might Sell for Twice the Sticker Price
Up Next

You should always believe in your dreams. Just don't expect things to magically happen without working towards your goals. And remember that reaching the highest mountain top will take time. The more ambitious your dream is, the more patience and determination you'll need to show. Buying that sports car you've always envisioned driving may take 10 years or more, but you'll get there if you don't lose focus.

Have you ever had dreams in stages? Stage one for car enthusiasts might start with a certain videogame or toy car. For stage two you start dreaming about getting your driver's license. Naturally, at stage three, you want to get your first car.

At stage four, you're already dreaming about something that is slightly more special like a Ford Mustang or a BMW M3. And then comes the supercar level with cars from Lamborghini, Ferrari, and Porsche. We're all allowed to dream, and you can even go further than that today, thanks to companies that build hypercars.

But people tend to lose sight of their dreams now and then. Perhaps it's because they find a different goal in life, or they can't find the energy to push on toward their goal. Most can go as high up as stages two and three, but few will ever join the supercar club.

And it's a shame really, as sometimes getting there might not be as impossible as you think it to be. And if that's the mindset you're facing when starting a long journey, you'll most likely fail to reach the destination.

Here's a good tip for you: visible progress toward your main objective will make things easier for you. So if your dream is to buy a Carrera GT, try to get an entry-level 911 first. That will give you a taste of the Porsche life, and will either give you the strength to carry on or reveal the fact that you'd rather go do a different route in life. And if you need an extra dose of inspiration to help you in your quest, we suggest you watch this 997 commercial that Porsche release almost 20 years ago.

It all starts in class, with the geography teacher asking kids a question about Europe. That's a good way of setting the stage for what's about to follow. As he's sitting by the window, the little boy who is the star of this video notices a sporty silhouette coming down the road.

Judging by his facial expression and the background music, it's not hard to tell that this is love at first for him. And we can all probably remember that first car that left a strong impression on us when we were growing up.

His reaction is the perfect way to describe what an automotive enthusiast feels when he's driving his dream car. You lose track of space and time, and you can't get enough of that rush that's going through your body. Some may compare it to love, but there are probably better ways to describe the connection between man and machine. The moment class is out, he rushes out of school and heads straight for the Porsche dealership. As he meets the salesperson there, he is invited to get behind the wheel.

If you have a cool car at home, this is one of the best experiences you can offer to a child that's fond of cars. That first contact with his dream machine will help fuel his passion, and anyone who's ever been there will understand that perfectly.

As soon as he gets out of the car, he asks the salesperson for a business card and concludes the meeting by saying "I'll see you in about 20 years." And it's probably the most heartwarming thing you'll see all day long. Still to this day, it gets us all riled up inside, and if you're as crazy about cars as we are you'll probably feel the same thing.

The soundtrack also plays an important role in this video. It's just enough to underline the feeling Porsche is trying to describe, but not too much to distract you from the main idea. Now if you'll excuse us, we're off to check the 911 Carrera classifieds and start working towards that dream. 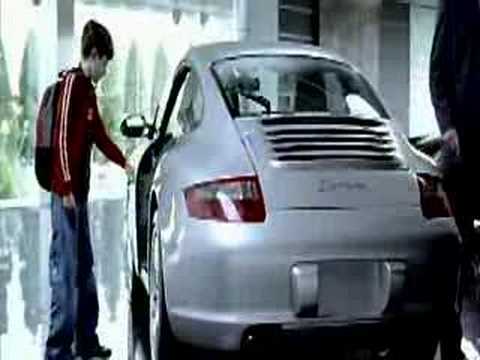