1 New 2023 Volkswagen Amarok Is Such a CGI Tease, You’ll Forget All About the Ford Ranger

2 New 2023 Amarok Teased Again, VW Says It's Bigger Than the Old One

Porsche Pickup Has a Lot in Common With the Ranger/Amarok Duo, What Would You Call It?

With Volkswagen and Ford teaming up to co-develop their new pickups, namely the upcoming Amarok and new Ranger, someone decided that it would be a good opportunity to see what a truck from Porsche would look like. After all, it would be doable, wouldn’t it?
6 photos

That someone that we mentioned in the intro is Theottle, who started off by using the new-gen Ford Ranger as a blank canvas. The vehicle has had a face transplant, getting the front end of the Cayenne, complete with the design of the hood, LED headlights, and bumper.

Numerous mouse-clicks later, the rendering artist has made sure that everything lines up, and then proceeded to modify other things, like the side skirts, and to bring the entire body a little closer to the asphalt. The profile soldiers on from the Ranger and the wheels were actually sourced from the real Cayenne.

It would’ve been interesting to see how the back end of such a mashup would look, but, unfortunately, the artist drew the line at yet another rendering that shows it from a different angle, with emphasis on the exact same modifications that we mentioned above.

Now, in theory, launching a Porsche pickup shouldn’t be too hard for the Volkswagen Group, considering that it would share its underpinnings with the upcoming Amarok. In practice, however, such a model would definitely not make any sense, because it would be much more expensive than its cousin from VW and not that comfortable compared to the Cayenne.

That was a lesson learned the hard way by Mercedes with the discontinued X-Class, which was nothing more than a rebodied Nissan Navara. On top of that, no one in their right mind would ever use a Porsche as a workhorse, no matter how loaded they are. But hypothetically speaking, if Porsche decide to launch a pickup, what should they call it? 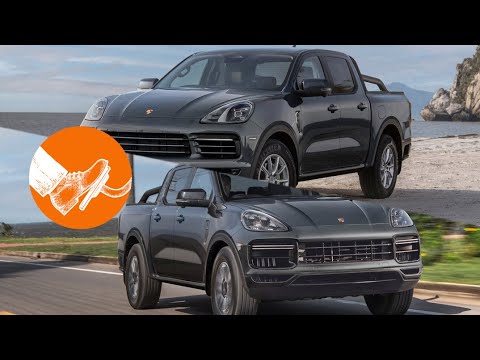