5 2022 Porsche Taycan Cross Turismo Is a Gravel Monster With a Friendly Face
Car video reviews:
Up Next

Time and again, we have seen incredible tales involving the wonderous automotive world of Russia. Well, this one is cause for celebration for the members of a family who seemingly had a guardian angel overlooking their shoulders. It came in the form of a sturdy piece of metal that ultimately stood between this near-miss and a potentially deadly disaster.
8 photos

Seeing a Porsche Macan with its nose sticking out from a residential building’s parking lot in a precarious position might easily raise a spontaneous question. Are we presented with yet another case of the mixed-up pedal variety? After all, it’s not the first time we see a Porsche end up in an odd posture.

But, according to local Russian media as well as official information shared by the parties involved on Telegram, it’s certainly not. Instead, this strange incident from the parking lot of the Moscow RC “River Park” residential building complex was apparently caused by a peculiar mix of elements.

We all know that Russia has a knack for harsh winters, and the capital city is no stranger to lots and lots of snow. Some of it managed to enter the parking lot, where there’s a very smooth concrete floor. That allegedly caused a total loss of traction for the Porsche Macan, and the driver wasn’t able to stop the SUV before it went through the exterior wall.

This unfortunate incident left the German crossover spectacularly hanging with the front end in the air from the fourth story of the building. Obviously, someone managed to seize the moment and deliver a photo bomb (it’s in the gallery, of course) with the “new attraction.”

As it turns out, at the wheel of the Macan was Russian professional ice hockey winger Denis Kazionov and his son and wife were on board with him. According to the residential building’s official channel, the sportsman is to blame for the incident, but we're just glad they were saved by that piece of metal that shows under the carriage in some of the photos. Talk about miracles... 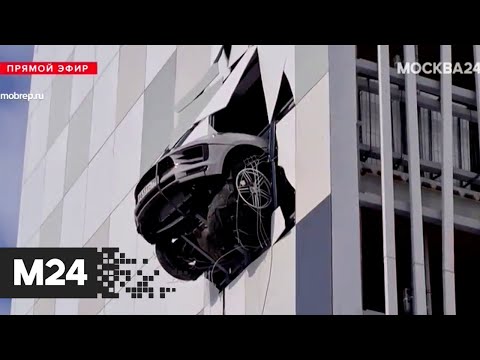