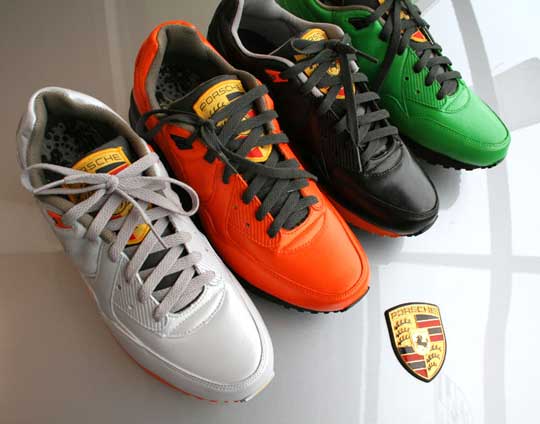 Many of you might be fans of Porsche and Nike enthusiasts as well, but if you wonder what the two famous brands have in common, the answer is a pair of sneakers. Actually not just one but four variations on the same theme. What theme? The most recent  Porsche GT3 RS.

The love-story between Nike and Porsche began on September 1st when Purchaze opened a retail shop in Groningen (about 30 miles from the German border) and met the Leyp staff and the owners of the Porsche store of the city. Since Porsche ”borrowed” a Cayman S for the Purchaze promo team, the shoe maker thought of rewarding this kind gesture with customized Nike Air Max Light GT3 sneakers.

Porsche GT3 RS made its appearance on the market in four colors: black, green, orange and silver. These are exactly the same colors of the new Porsche-Nike shoes. And as if imitating the colors of the Porsche car weren't enough to realize the link between the two brands, Nike added the Porsche logo on the sneakers' tongue.

At the end of December last year, Purchaze and Leyp introduced the shoes to their future lucky owners, the Porsche staff. They are going to wear them in the upcoming races.

Apparently, the Porsche staff seemed delighted with their new shoe acquisition partly because the GT3 sneakers were inspired by their most recent Porsche car and party because they are even more exclusive than their motors. After all, who wouldn't want a personalized pair of Nike sneakers?!

Unfortunately, the sneakers are not addressed to the general public and we have no information on a possible availability for the Porsche-Nike fans.