When I first saw the news, I couldn't believe my eyes. Two of the greatest automobile manufacturers of all time and one of the fastest emerging brands on the market are getting together on a whole new level. The creation of Bugatti Rimac is something nobody would have even thought of 10 years ago, and yet here we are.
15 photos

The news was broadcasted live today, from Dubrovnik, in Croatia. A Rimac Nevera, a Bugatti Chiron, and a Porsche Taycan Cross Turismo were flown in via helicopter on top of a 14th-century fortress where the festivities were held. Mate Rimac talked about his early beginnings, his electric-powered BMW E30, and the creation of the company more than a decade ago. He briefly reminisced about all the hardships that led to this moment, noting that he hadn't expected to go so far so fast when he first started.

At the present time, Rimac is at a stage where it employs more than 1,000 people and is in the process of building a new campus near Zagreb that will be home to more than 2,500 employees, all of which will happen within the next two years. Mate also discussed the brand's development via two branches, that of building hypercars and that of developing new technologies that can be employed by other companies as well.

As the saying goes, "real recognize real," so Porsche took notice of the huge potential that Rimac presented itself with and became a shareholder three years ago as part of a strategic chain of decisions, which is reflected in today's news as well. Porsche and Rimac have officially announced today that after 18 months of fruitful negotiations, they have established a joint venture, including Bugatti, that will be called Bugatti Rimac.

Rimac will control 55% of the shares of this new joint venture, while 45% will go to Porsche. As per the official statement, "Porsche and Rimac Automobili are the perfect partners to accompany Bugatti into the future". After following the live press declaration, there's no official confirmation of a Bugatti Rimac hypercar yet, but everything does seem to be pointing that way.

Mate Rimac will be the CEO for both Bugatti Rimac and Rimac Automobili, and I believe that this move confirms the rumors regarding an all-electric Bugatti. Those rumors have been doing the rounds on the internet for quite some time now. Talking about the new project, Mate Rimac was visibly excited and honored to play an important role in the whole thing. I wouldn't be surprised if in a few years he'll reach the same levels of popularity Elon Musk enjoys at present times.

"This is a truly exciting moment in the short, yet rapidly expanding history of Rimac Automobili and this new venture takes things to a completely new level. I have always loved cars and can see at Bugatti where passion for cars can take you to. I can’t begin to tell you how excited I am by the potential of these two brands combining knowledge, technologies, and values to create some truly special projects in the future,” Rimac said.

At this point, it can be hard to imagine what a Bugatti Rimac car may be like. Perhaps it will hit the market by 2025, and if it should stay true to its legacy, we might just be seeing top speeds of more than 350 mph (563 kph) on a production vehicle. At least we can dream until we get some official information from the newly formed hypercar manufacturer. 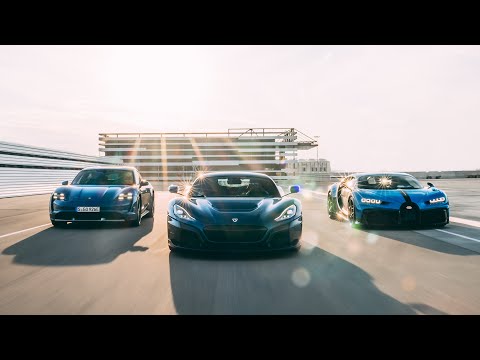