One could easily bet on Solomon Lunger, the affable host of the Ford Era channel on YouTube, to pick some of the best F-Series trucks out there. No matter how subtle they look, there is always something to make them stand out in a crowd.
36 photos

After recently checking out some cool fifth- and sixth-generation creations, it was only logical to go back a bit further in time for a new “What the Truck” episode. So, Lunger somehow managed to dig up a great fourth-generation Longbed... even though it has only been on the road for a couple of weeks at the time of filming (video embedded below).

And, as always, there’s a remarkably interesting story behind the build. So, even though this 1966 Ford F-100 looks a bit subtle for what we are used to seeing across the F-Series enthusiast community, there are a lot of secrets to be uncovered.

Porsche aficionados will notice one of them from the onset. It’s the “Chalk” paintjob that oddly enough bodes well for this classic American truck, although it was imagined as a tribute to the light greys used by the company during the 1950s and 1960s (Pearl, Heron, etc.) on its sports cars.

Then it’s up to the owner to reveal that he finished this truck alongside his father over the past 18 months. They turned a bare desert shell find (with no engine under the hood) into a daily driver with the looks of a ‘66 and all the modern bits and pieces needed for a contemporary experience – including chassis, engine, and transmission.

Of course, there’s a catch. His dad has been working on hot rods for a living and has an incredible number of connections. Hence the stunning interior and all the bits and pieces neatly fit together for something almost perfect. The presentation will reveal them all from the two-minute mark, including the Classic Instruments gauges, the RetroSound, Vintage Air, or the Scotts Hotrods chassis, among others.

And these are just the highlights because the details include the Ridetech coilovers, the all-around Willwood brakes, or the vintage-looking 20-inch Detroit Street Wheel Co. shod in Michelin Pilot Super Sport rubber. And that is a hint towards what has been tucked underneath the hood.

Naturally, the piece of resistance is the new engine. Remember how the bare desert shell didn’t have a motor? Now that’s been fixed via a Gen 1 5.0-liter Coyote swap, which sends all the power to a 12-inch bolt rear end with help from the Ford 6R80 six-speed automatic transmission people have been commonly using on the modern F-150 for more than a decade already. 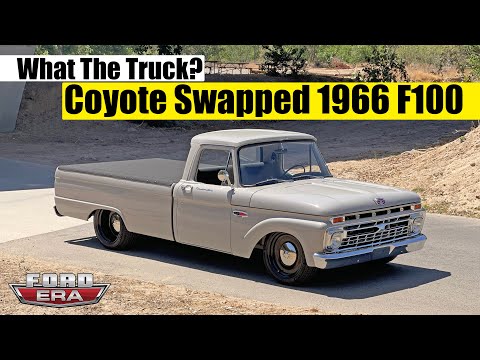