Home > News > Car Profile
Mihnea Radu
We've seen both these cars drag racing since late last year. The Cayenne Turbo took on a Range Rover Sport SVR and a G63 on some grass, while the RS4 Avant was a long-termer for Carwow and even got to go up against the Porsche 911 GTS.
3 photos

But this is an entirely different kind of Porsche, an SUV with a big V8 engine under its hood. In fact, aren't both these engines shared between a bunch of companies. You can get the Cayenne engine in the Bentayga and the RS4 engine in the Cayenne S.

So it's a 2.9-liter twin-turbo making 450 HP and 600 Nm in the RS4 and a 4.0-liter twin-turbo with 550 HP and 770 Nm in the Turbo. To compensate for the difference in power, the Audi is lighter by about four passengers' worth. Also, we'd like to point out its launch control is pretty good. Otherwise, it couldn't keep up with more powerful rivals like the M3 and C63 S.

So which is the fastest? Well, according to the official specs, they are evenly matched to 100 km/h, taking 4.1 seconds to get there. We're not buying that; it sounds too good to be true.

As the flag drops, the Cayenne Turbo gets a slightly better launch and steadily stretched its small lead to win. However, the quarter-mile time is inferior to previous RS4 attempts, so Mat Watson agrees to have another race, and this time, the Porsche SUV loses.

There's only one thing to do, and that's to have a decider. This time, the Cayenne's computers seem to freak out a little, limiting power just enough to let the RS4 win. Audi UK is probably looking at this and thinking "it's a good thing we gave Carwow that car," because YouTube videos like this probably helped sales a bit. 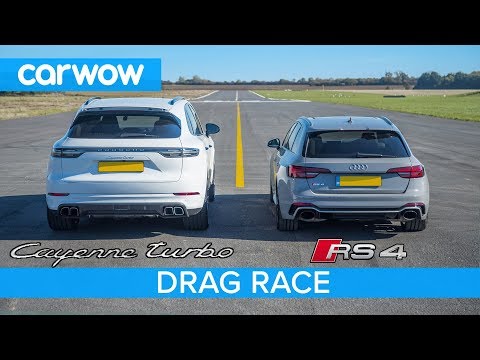