Home > News > U-turn
Codrin Spiridon
Drag races are becoming more and more uneven by the looks of it, but in all honesty who really cares about fairness when at the end of the day it's all about the spectacle.
6 photos

In the first race, the Porsche smoked both bikes off the line, but in a split second, the MotoGP KTM simply flew by the 911 without breaking a sweat, while the Super Duke R was lagging behind. The RC16 came in first, the Porsche second, and of course, the last bike came in third with its little V-Twin that could.

The second time around, it was basically the same scenario. The MotoGP KTM came in first at 9.2 seconds at the quarter mile, the Porsche finished in 10.3 seconds, while the Super Duke R 1290 Evo came just 0.6 seconds after it, at 10.9 seconds.

There was no third time of course, given the constant results that wouldn’t change no matter how many times they went at it. However, at the braking test, the Super Duke R regained its glory by beating both the MotoGP bike and the Porsche. 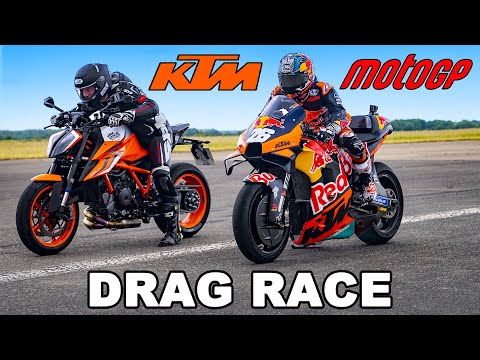