4 How Australian Police Ended Up with a Porsche 911 Carrera

Having just made its debut at the 2015 Geneva Motor Show, the new Porsche 911 GT3 RS has no time for fooling around. The Stuttgart track-oriented machine is back at work on the circuit, because you know, there's no rest for the wicked.
1 photo
Porsche just shared a video on YouTube and it's all about putting the new 911 GT3 RS where it belongs: on the race track, the exact environment Porsche created this car for. Behind the wheel, hooning the 911 GT3 RS on the Nardo test track is Brendon Hartley, Porsche factory driver who also holds a brief introduction about Porche's testing facility in South Italy.

There's no doubt Hartley definitely has the skill required to drive the GT3 RS to the limit, especially when we're talking about a car that was nine seconds faster on the Nurburgring than the Carrera GT.

Many argued that on today standards, the Porsche 911 GT3 RS isn't actually a supercar since it 'only' packs 500 HP and 460 Nm (338 lb-ft) of torque. However, it can reach 100 km/h (62 mph) from a standstill in 3.3 seconds and can cut through corners like a hot knife through butter, not to mention it has the tendency to make cameramen sick, as you are about to find out.

The 4.0-liter flat-six mill has something special about it and the new PDK gearbox seems to be doing wonders in getting out all that magic stored in the engine. Of course, race track junkies will also want to thank engineers and designers for coming up with a body kit and a carbon rear wing that put downforce where it matters most.

But talk is cheap so our best advice is to click play and see what the video is abou. By the way, the fun parts starts at 4:24. 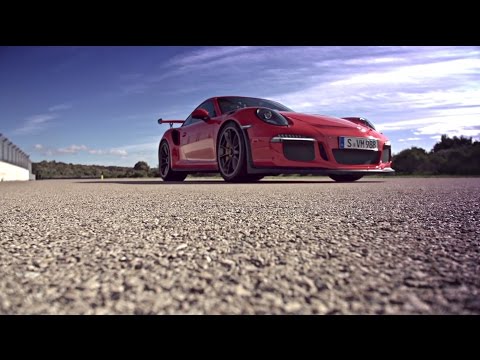