5 Hop Onboard for One More Lap at the Ring in the Toyota GR Yaris Before Christmas
Car video reviews:
Coverstory

Porsche 911 GT3 RS Gets Driven on the Nurburgring With Hand Controls, Is Fast

Some say that your only limitation is your mind, and how far your imagination can take you. Without attempting to become self-help gurus here, we can agree that there is a bit of truth in this saying, to say the least. If you never imagine yourself doing something great, the chance of that happening is decreased significantly, but not zero.
9 photos

A man named Philippe uses hand controls to drive his Porsche 911 GT3 RS 4.0, and he takes Misha Charoudin on a lap of the world's most demanding racetrack, the Nürburgring Nordschleife. The YouTuber has done countless laps of the German track, both as a driver and as a passenger, and you can consider him to be one of the people who know the track by heart.

When someone is as familiar with a track as Misha is, you can only scare him if you are doing something wrong or if you are doing things exactly right. For some brief moments, when silence sets in during a hot lap or when intense driving happens, you never quite know, as a driver, if the passengers are enjoying themselves or if they are terrified. Misha's face tells the true story, and he is having a blast.

Philippe, a technical designer in the aeronautical and paraplegic field, has been passionate about mechanics since childhood. Now, he works to help others in getting their cars adapted for hand controls, while also importing vehicles from Germany to France, his homeland.

As you will observe in the video below, Philippe is no stranger to his Porsche 911 GT3 RS 4.0, and he does not look like a stranger to the 'Ring, either. The world's most demanding racetrack is longer and with more corners than several tracks put together, so doing a good lap here involves experience on the track, knowledge of your vehicle, and knowing the particularities of the 'Ring.

Philippe takes things to the next level in his drive, as he demonstrates smooth driving at an impressive pace. While he is clearly focused on the task at hand, Phil, as Misha calls him, manages to provide smooth input to steering, brakes, and throttle as if he is on a leisure drive, although the speedometer tells a different story.

One cannot help but notice the fact that he also uses his car's turn signals while passing other vehicles, which is considerate and impressive (since it is also done using his hands) at the same time. 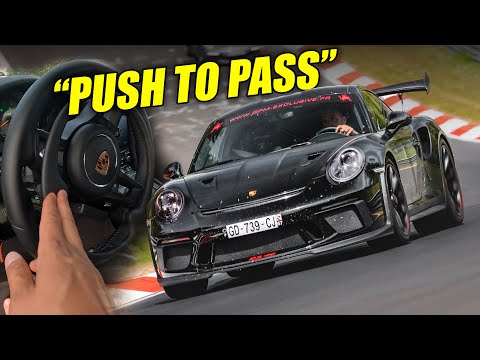