Cristian Gnaticov
Porsche has treated the 718 Boxster and 718 Cayman to the Style Edition Package. Both models now sport some exclusive touches inside and out, though you’ll have to be a fan of the company based in Stuttgart to tell them apart from the rest of the range.
12 photos

Set to become available in Europe at first and overseas, later on, the new 718 Boxster Style Edition and 718 Cayman Style Edition can be had in Ruby Star Neo, a more modern interpretation of the Ruby Star first used on the 964 variant of the 911 Carrera RS.

Both of them ride on 20-inch wheels in high-gloss black as standard, with colored Porsche crests, and have high-gloss silver ‘Porsche’ lettering at the back and black sports tailpipes. The ‘Boxster’ logo was embossed in the rag top above the side windows on the open-top model. Moreover, two contrast packages are offered at no extra cost, in black and white, and they comprise the decorative stripes, ‘Porsche’ lettering on the sides, black and white finishes for the wheels, and model designation at the back, respectively.

On the inside, the new Style Edition variants of the 718 Boxster and 718 Cayman have black leather with chalk stitching, backlit door sills, Porsche crest on the headrests, heated seats, heated steering wheel, dual-zone climate control, Apple CarPlay, and auto-dimming rearview mirror. The side mirrors have the auto-dimming function as well, and the front and rear parking sensors, reversing camera, Power Steering Plus, cruise control, bi-xenon headlights with LED DRLs, and rain-sensing wipers are also standard. A range of optional extras can also be specified for the two models.

Powering them is the base motor, namely the 2.0-liter turbocharged unit with four cylinders, mated to either the six-speed manual transmission or an optional dual-clutch seven-speed automatic gearbox. The engine pumps out 300 ps (296 hp / 220 kW) and 380 Nm (280 lb-ft) of torque, enabling the 0 to 100 kph (0-62 mph) in 5.1 seconds in the three-pedal versions, and 4.7 seconds when had with the PDK. Top speed stands at 275 kph (171 mph) regardless of the transmission option. 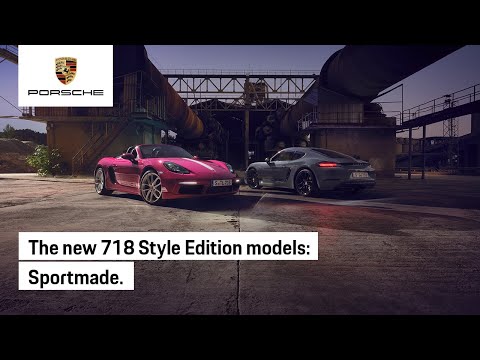