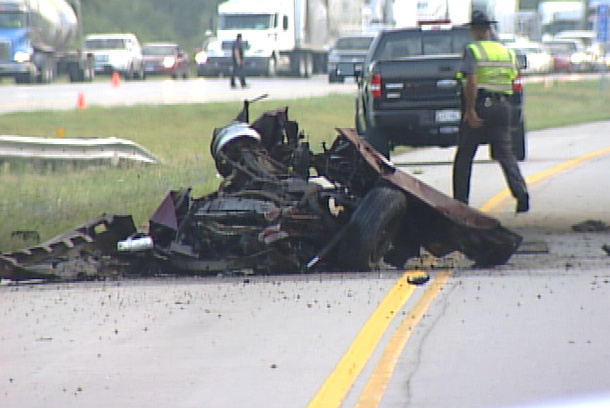 An incredible accident was caught on tape as it happened on Interstate 675 in Sugarcreek Township, Ohio yesterday, with the footage showing a Pontiac Firebird leaving the road, hitting an overpass and getting thrown into the pillars of a bridge.

The violence of the impact sent debris flying all over. For sure, those witnessing the crash must have thought the driver is gone for sure but, to his luck and the rescuers' amazement, he walked away from the crash with his life.

The name of the driver is Brennan S. Eden and he's a 19-year old from Mason, Ohio. The teen was driving his Firebird at high speeds, estimated at around 100 mph (160 km/h) when he lost control of the car while passing a Sugarcreek Township police cruiser. The same cruiser which caught this incredible accident on tape.

"He went down into the median, into the grass, hit the guardrail, went airborne and the car hit the center post of the bridge and literally exploded into three main pieces," witness Mark Riley was quoted as saying by wdtn.com.

Eden was ejected and recovered by emergency workers. The was airlifted to Miami Valley Hospital, where he was admitted in serious condition. According to doctors, he is still in critical condition.

"He is very lucky to still be alive at this point," Ohio State Highway Patrol Lt. Marty Fellure told the source. "You can see behind me the impact he took and where he got ejected and landed, he's a very fortunate man right now."