1 Ferrari Enzo Replica Based On... Ferrari F430 Is a Million Dollar Fail

2 This Lamborghini-Loving Woman Works on Her Car Collection [Updated]

3 Supercars: Where They Came from and Where They're Going Next

Pontiac Fiero with a Supercharged V8 Is Seriously Cool

The Pontiac Fiero is what we call the darling of the replica scene in America. Anybody who wants to make his own Lamborghini Reventon or McLaren F1 from duct tape and polystyrene buys one of these and.. yeah, we all know what happens.
1 photo
Unfortunately, there's a side effect to this as well, since nobody has any respect for the humble Fiero, a car that just wanted you to have fun and enjoy its mid-engined layout.

Well, we're about to show you a Pontiac Fiero done right, the hotrod way. A guy took the old 4-cylinder motor out and replaced it with a V8. That wasn't enough though, and a supercharger was added, together with a ginormous air stack.

A guy by the name of Tracy is our hero of the day, as he somehow stuffed a 455 engine into the tiny frame of the Fiero and somehow still found room for a Toronado drivetrain. He's a member of the Suncoast Fiero Club in Tampa, Florida.

The 1984 model was bought by him in 1889 and let the misses drive it around for a number of years. She eventually overheated the engine, so it was time to say "out with the old and in with the new."

Considering the motor probably weighs as much as the chassis, they've had to add a bit of strengthening, including a roll cage that goes through the rear glass to the rear subframe and some underbody protection. The Fiero monster is street-legal, but it has a roll bar at the back because the front end goes light when accelerating.

The paint is actually what drew us to this car because it's one of the best finished Fieros we've ever seen, much better than new. 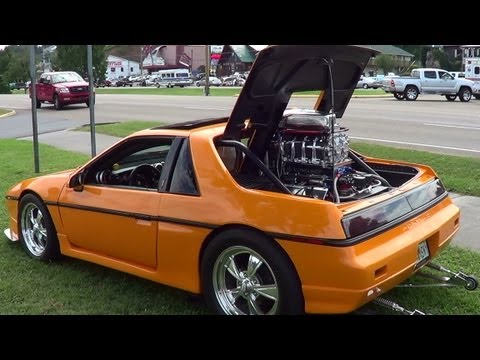