4 SsangYong Workers, Board to Hold Talks in "Peace Zone" 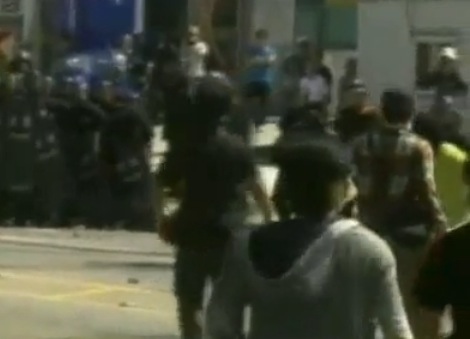 It was only a matter of time until the protest at SsangYong's plant in Pyeongtaek turned into a violent confrontation between the strikers and police forces. If until now special troops avoided using force against SsangYong employees, authorities changed their mind and assaulted the production facility.

According to a report by just-auto.com, police gained control of most of the buildings and protesters have been taken out of all but one paintshop.

Unfortunately, the police - workers clash resulted in many injuries, 46 SsangYong employees and 30 police officers, as Gyeonggi Provincial Fire and Disaster Headquarters said. One of the union members appears to have serious spinal trauma, the workers' union said criticizing police's actions. Three strikers fell of the buildings during the clash, just-auto.com wrote.

"One of them is in a critical condition, due to loss of blood," a union member told the Herald.

"We have not set a deadline for our operations, and will take our time in moving into the remaining paint shop building," National Police Agency chief Kang Hee-rak told reporters. "Security should, at all times, be considered the most important factor in our operations."

And the accusations do not stop here. Union members are claiming that police troops shot rubber bullets randomly when assaulting the plant from helicopters. Isolated workers fought back with slingshots, metal pipes and even petrol bombs, lighting up a part of the plant which had to be extinguished from helicopters.

Just as expected, the union described police's actions as "inhuman" and pointed to those times when troops didn't allow food or medical staff inside the plant.

Here is a video showing the clash between the strikers and the police troops (courtesy of NTDTV.com):