1 Failing at Parenting, You're Doing It Right

Vlad Mitrache
If there's something strange in your neighborhood, who're you gonna call? Ghost Busters? No way. You'll dial 911 (or whatever the emergency number is where you live) and sit tightly for the police to arrive and take care of the situation.
1 photo
Yeah, well, that's the ideal case. That's how our mothers raised us, but in the meantime, we've seen enough things to make our own impression on how much you can trust the police. Spoiler alert: not always that much.

Being a policeman is a great responsibility. Unless you're a surgeon, or you build atomic bombs, making a mistake at work isn't going to have such serious repercussions. Police officers, on the other hand, they're always under the spotlight, and every wrong move they make is quickly blasted by the media. Granted, they don't always actually pay for their mistakes, but it does put extra pressure on them nevertheless. Which is one way to explain the monumental cock-ups they sometimes make.

Take this patrol truck from Australia for example. It's traveling down a two-lane express road that's pretty crowded in the opposing lane, but clear on the one it's in. It's hard to tell as the pickup truck is only a spec in the distance when it happens, but there's a golden Porsche Cayenne overtaking those slow semis that forces the police vehicle onto the road's shoulder to avoid crashing.

If you were in their place, you'd want a police car to appear out of thin air and stop that idiot before he kills somebody, right? Well, the Cayenne driver was unlucky enough to pull that stupid move precisely on a police car, so there was no need for magic. However, there was the need for plenty of patience, and the police officers gravely lacked in that.

The truck driver with the dashcam did everything right. Looking in the bottom left corner of the screen, you'll see his speed decreases from 100 km/h (62 mph) when he spots the police truck pulled over on the side of the road. He still wasn't expecting what followed, though. Without any warning - no siren, no flashing lights, no indicator - the police car performs a U-turn in front of two moving large trucks. If you look at what was behind the one coming in the opposite lane, it's only down to very good driving of everyone else involved that the idiot in blue didn't cause a huge chain accident. And do you imagine he managed to catch a Porsche Cayenne with a significant headstart in that piece of crap (at least as far as speed goes) he was driving? Exactly. 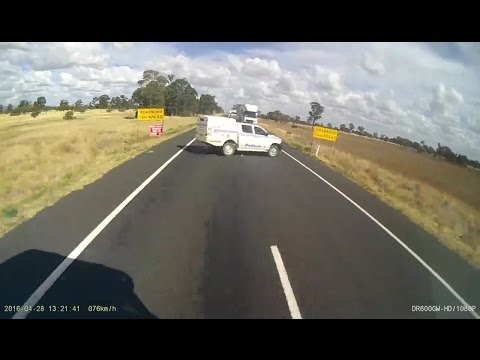