1 Classic Indian Sport Scout Was Kept in a Living Room, Now Heads to the Auction Block

2 Harley-Davidson Pan America Recalled As They Could Lose Weight, Like Passenger Weight

5 Harley-Davidson New LiveWire One Is a LiveWire With a Big Price Drop
Car video reviews:
Up Next

The Brabus 820 Porsche 911 Turbo S Cabriolet: An Open-Top Experience Unlike Any Other

Police Harleys Go for an Off-Road Fun Ride, They're As Unstoppable as They Come

Home > News > U-turn
Razvan Calin
Dirt bikes and motocross tracks make a great pair, and any biker would agree with this statement. Still, no biker can tell a bike's limits until it puts it under a trial of mud and jumps. But not many bikers are eager to take a Harley-Davidson motorcycle and thrash it around on a hare scramble course.
22 photos

That is precisely what the Bikes and Beards riders and YouTubers did. If you're unfamiliar with their (predominantly) two-wheeled adventures, then it's time to find out. They like motorcycles, and they have beards. They describe themselves as being "Christian guys who left the jobs they dreaded to enjoy work and love life. Trying to juggle the demands of work and family all while trying to change the motorcycle industry and the way people buy motorcycles."

Recently, they bought two Harleys - not just plain civilian ones, but the real deal police motorbikes. Sold at a government auction, the vehicles have served their time in law enforcement, and it was time for retirement. Long story short – Bikes and Beards got them.

The latest stunt they pulled off is in the first video of this article, and it's a lesson on "Don'ts with Harleys." The bikers took their newly acquired 2016 FLHTPs to the dirt tracks. For everyone outside the world motorbike society, FLHTP is the abbreviated form of "Harley-Davidson Electra Glide Police."

Back on track (the mud track) with the bearded police Harley owners, the 950 lbs (430 kg) motorcycles proved utterly unstoppable. Despite their lack of off-road suspension, grippy tires, or high-revving engines, the Harleys went through everything the riders put them in.

And it's no small deal for vehicles equipped with street tires and gentle V-twins. Don't be fooled, though; the mild-purring pair of pistons put out 73 hp and a good 88 lb-ft of torque (120 Nm). The adventurous duo did dyno the bikes at a Harley dealership. See the second video for that piece of the action.

I guess there are numerous reasons why the police use these motorbikes on the street and not on a forest trail, but judging from this video, none of those reasons are bike performance related. Sure, it may not be the optimal choice for mud fun, but the FLHTPs didn't quit. They got up every single time and carried on. We'll keep an eye on the Bikes and Beards' adventures and let you know what the Harleys will do next. 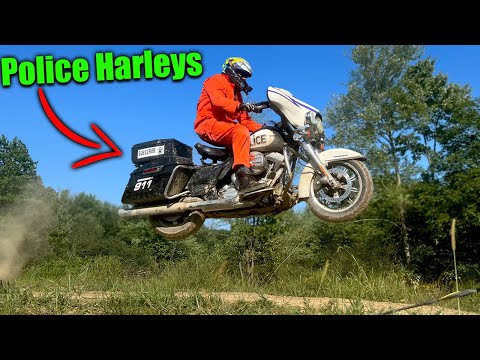 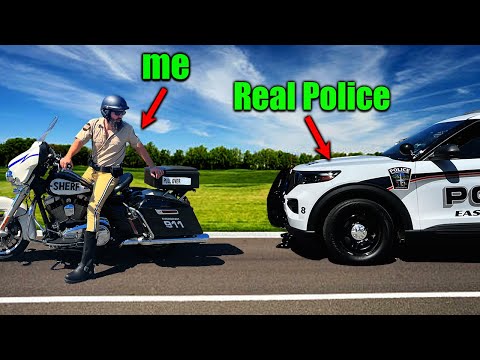