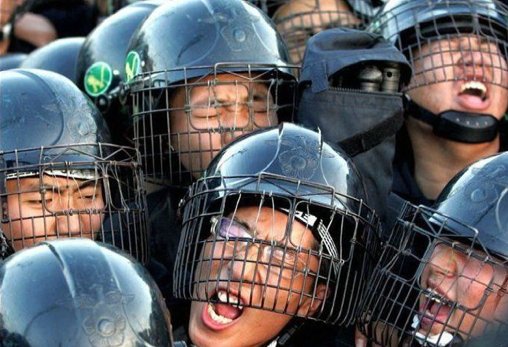 Things heat up at SsangYong's Pyeongtaek facility, where hundreds of police officers are reported to have stormed the buildings occupied for almost two months. The initial assault of Korean riot police managed to do little, as over 800 workers were yesterday still facing off the over 3,000 police officers deployed against them.

The police-workers stand-off began a week ago, when law enforcement announced they have "occupied the gates in preparation for the use of police force."

According to just-auto.com, yesterday the workers defended themselves by firing nuts and bolts from "large slingshots", while police officers took cover behind steel nets already deployed. According to Bloomberg, the only casualty was...a SsangYong worker, hit by his band of brothers.

The police made their move after SsangYong cut off water and gas to the plant and were acting with due diligence, as the paint shop in which the 800 workers were making their stand contained more than 33,000 liters of flammable materials.

According to the Korean manufacturer, the two-month long occupation of the Pyeongtaek facility has cost the carmaker about 10,800 vehicles, worth some 230 billion Won ($183 million). No one calculated how much SsangYong would have lost if it had given the workers whatever they were demanding, but surely it would have been well below that...

The workers are determined to hold their ground in "the face of the death", as Lee Chang Kun, a union spokesman told Bloomberg. "If the police want to make another tragedy, go ahead. All responsibilities will fall on the government and the company. We will fight to the end. This factory is the last fortress laborers cannot give up," the union warned last week.