5 Triumph Should Rename the Rocket 3 R to Rocket 2.73 R
Car video reviews:
Up Next

People keep talking about the failure of the BMW i project, how the i8 didn't sell well and dropped in value after that. However, it's a little better than we think, as proven by this drag race video also featuring the Polestar 1.
3 photos

The shootout is organized by Auto Motor & Sport of the Swedish variety (normally AMS is a German magazine). The star of the show is not the i8, but the Polestar 1. This feels like a unique product, spun off from the Volvo brand and taking a unique approach to delivering its performance.

Where most sports cars only have one engine, this has a whole bunch because it's a plug-in hybrid. Like many regular Volvos, this coupe uses a 2.0-liter unit that's not only turbocharged by also supercharged.

Two additional electric motors sit inside the rear axle to give this a unique torque vectoring ability and a combined output of 600 horsepower plus a full 1,000 Nm (738 lb-ft) of torque. Frankly, those numbers remind us of crazy Brabus roadsters from the past. But is the Polestar 1 all that?

Its plug-in rival is the i8, which in this case is the facelift version and a roadster. The 1.5-liter turbo engine is helped by its own electric motors to offer a combined 374 hp and 570 Nm (420 lb-ft) of torque.

But the unexpected happens in the drag race. Despite having way more power, the Polestar falls behind. It eventually catches up and overtakes the BMW roadster, but only by the slimmest of margins.

We almost forgot to mention that there's a third car in this shootout. It looks like a normal Porsche 911, the base model that gets 380 hp from your average flat-six 3-liter engine. It gets amazing traction at launch, due to being lighter by about a Peugeot 108's worth compared to the Polestar. 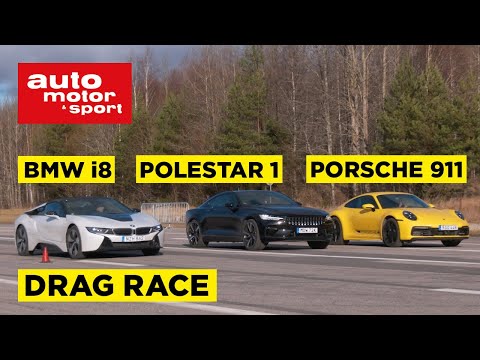