1 Ford F-150 Lightning Wants to Be a Raptor, CGI Grants Its Wish, but What Say You?

4 Dark, Lowered Chevy Tahoe Feels Like a “Shadow Line” Away From Vexing Sequoias

Although Subaru and Toyota probably think it’s genius, not everyone is happy with their shared development and production partnership for the BRZ/GR86 twins. Of course, only so few can do something about it. Even if only virtually.
20 photos

These two 2+2 fastback coupe sports cars have been around for a couple of generations, already. They are jointly manufactured by Subaru at its Gunma, Japan factory. And share numerous components throughout their naturally-aspirated FA24D boxer engine, RWD configuration.

Naturally, Toyota and Subaru have attempted to make sure that people will not refer to them as identical twins. However, the styling changes between the BRZ and GR86 are still not enough for some. Cue in the virtual artist better known as Theottle on social media. He is among the people who decided they are not happy with the Subaru-Toyota family relationship.

So, he selected the BRZ (after all, it was the first of the second-generation models to appear out in the open) to CGI-sever its design ties with the Toyota GR86. Naturally, he used his virtual powers to re-body the Subaru representative into something else. Although, we are not exactly sure it is for the better...

Bear with us. Subaru has a new model that has been hyped more than its BRZ. It also comes with just three letters and the same FA24(F) engine, but it is a tad larger and sports four doors. Naturally, we are talking about the 2022 WRX performance sedan. A model that has not been received with wide open arms by the fan base.

Yet, this was exactly what the pixel master used as the template for the redesign. The result, however, is quite interesting. One cannot say it completely eschews potential controversies. But the new “Origami,” edgier BRZ does have a beefier, muscled-up appearance. Additionally, it is quite interesting to see that Subaru’s WRX design actually looks better when shrunk to more compact dimensions. And in the two-door body form...

Now, a BRZ WRX is just wishful thinking. But it does give us a neat idea: how about the BRZ sporting the WRX’s turbo boxer mill with 271 horsepower under the hood? 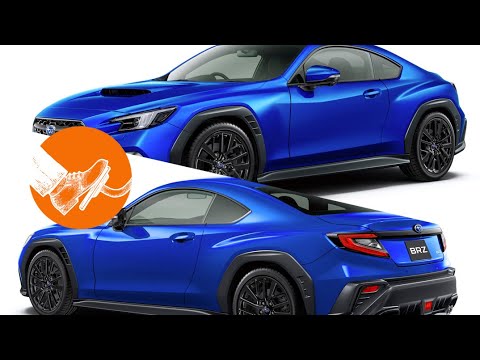