2 McLaren Lays Off More Than a Quarter of its Employees

Part of the Sports Series lineup, which is another way of saying that it’s an entry level model, the McLaren 570S is a mid-engine supercar in no need of introduction for McLaren fans and supercar aficionados around the world.

Unveiled back at the 2015 New York Auto Show, the tiny McLaren that could has had its fair share of friendly fights with everything from Ferraris to Porsches and Lamborghinis, both on and of the track, with the British carmaker having developed a mighty giant-slayer with its smallest model.

A lot of aftermarket specialists have gone the way of upgrading the looks of the 570S over the years, but not that many have tampered with its engine or various performance parts it includes, despite essentially being a smaller version of its more power brothers and using similar technology.

That said, its age is starting to show, so the 570 horsepower delivered by its twin-turbocharged, 3.8-liter, flat-plane V8 is no longer as impressive as it was when the model first went on sale back in 2015, especially since the car will soon be replaced by a more powerful hybrid.

Southern Germany tuning company Pogea Racing decided that some McLaren customers don’t need to wait that long for some extra oomph from the smallest British model and not long ago unleashed an upgrade package that takes things to a truly diabolical level.

With 666 horsepower and 800 Nm (590 lb-ft) of torque on tap, the McLaren 570S by Pogea Racing becomes the McLaren 666S, while at the same time delivering performance figures close to hypercar level.

Unlike the days of yesteryear, when you needed an army of technicians to change almost every part of an engine to achieve an extra 96 horsepower and 200 Nm of torque, now it's almost all done through a computer and a better exhaust.

To achieve these numbers, Pogea fitted the model with an all-new exhaust system from its own company, MONSTERexhaust, with an X-pipe connection and two electric highspeed flaps dynamically controlled via the CANBUS and therefore EURO6 and TÜV-compliant in all driving modes.

A set of HJS 200cpsi catalysts, the encapsulation of the downpipes and the complete exhaust system with thermal insulation together with a Stage II engine management system, are responsible for squeezing the devilish amount of horsepower from the flat-plane V8.

To better control that extra grunt, Pogea has also fitted the McLaren 666S with a coil over suspension from KW and a set of Michelin Pilot Sport 4S shod on concave, bidirectional 20-inch Pogea Jules wheels.

Unlike other McLaren 570S tuning projects, the package doesn't a complete redesign of the model with the help of a wide body kit or fancy spoilers and wings. You can, of course, add all of those from someone else to complete the diabolical look of the car.

Surprisingly enough, the 666S kit only goes for 11,000 euros including VAT in Germany, which is almost a bargain if we don't consider that you also need to shell out $200,000+ for the car in the first place. 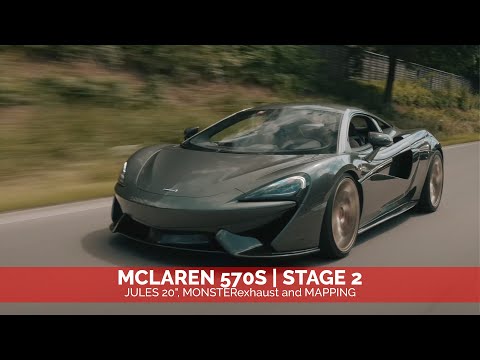