Aurel Niculescu
They say that retirement makes seniors frugal, but that might not be valid in the crazy world of racing restomods. Because, frankly, the “Green Goblin” Plymouth Barracuda 426 Hemi we’re about the witness sure looks like a “no expense spared” build.
25 photos

Say what you will about drag racing and its theory of going as fast as drivers and machines can in a straight line for a short period. But don’t call these races uninspiring or boring. After all, the permutations for possible surprises are way too many to name in a heartbeat.

This time around, the good folks over at the Wheels channel on YouTube have a massive (well, sort of, at eight and a half minutes) “old vs. new muscle cars” drag racing treat. And we got awestruck at the sight of a very green (hence the “Green Goblin” nickname) Plymouth Barracuda.

There’s virtually no information about this racing build, but we can all suspect the 426 Hemi motif on the hood is just part of the wild story. It doesn’t even matter too much, as the first skirmish it gets involved in sees the old-school muscle car duke it out with the newest iteration of the mighty Ford Mustang Shelby GT500.

The latter probably arrived at the party in stock form and thoroughly unprepared for what came next, hence the awfully slow start – during which the ‘Cuda was already way ahead. It did try to catch up on the final stretch, but of course, to no avail. So, the youngling needs to go back to racing school to try and improve its 11.35s result against the Mopar’s glorious 9.44s run!

By the way, this video is riddled with old vs new battles, and another interesting skirmish features the beloved C8 Chevy Corvette (from 3:40) also getting taught a proper lesson from a slightly older Chevy Camaro SS sporting an LSX conversion (9.97s to 11.87s). Then, believe it or not, it’s time for some Blue Oval vengeance.

This is because from the six-minute mark the Cuda comes back for another feud against a Ford Mustang. This time it’s a fifth-generation representative that also went through vitamin therapy of unspecified provenance. As such, this time around the GT has the upper hand, ending with an 8.64s ET to the Plymouth’s constant 9.5s result. 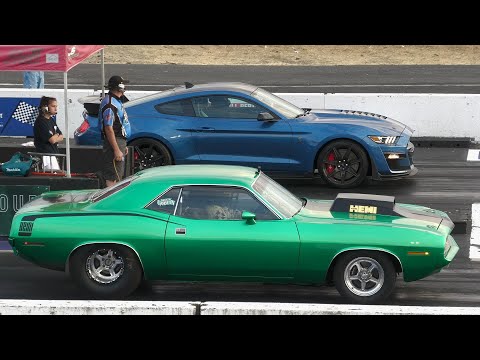