1 Rod Stewart's Lambo and Ferrari to Go under the Hammer 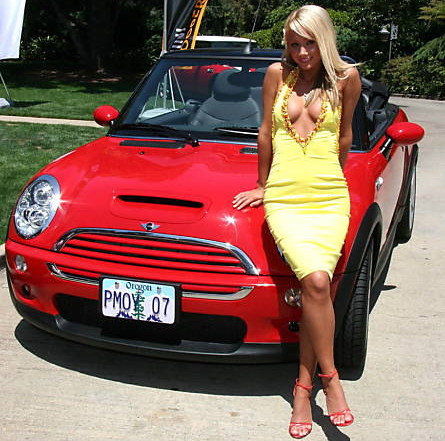 We don't know whether playmates are affected by the global recession as well but one of them is selling her car on eBay and is trying to get some extra bucks on it taking into consideration her fame.

TMZ stumbled upon this 2007 Mini Cooper convertible belonging to Playmate of the Year, Sara Jean Underwood, which is being sold on eBay for about $9,000 more than its real value. Sara receive the car at the 2007 Playmate of the Year Luncheon at the Playboy Mansion in Beverly Hills, CA for becoming Playboy's 2007 Playmate of the Year. With less than 13,000 miles on the odometer, Sara confesses she has taken very good care of the car but that she no longer needs it as she has moved back to Oregon.

Like owner, like car, we might say about this Mini Cooper as the vehicle has "posed" for the Playboy Magazine with Sara of course and has also starred in the famous TV show "The Girls Next Door".

Well, all these certainly sound really tempting but wait until to hear the price! Although such a car would normally sell for about $26,000, Sara hopes to get $34,999.99 from the interested buyer.

If it wasn't this financial crisis floating in the air, we might have thought Sara's car could have found a new owner very easily. But given the situation, Sara may have to wait for a while until she finds an interested buyer... if she's going to find one at this price.

Until then, feel free to admire Sara and her car in our gallery below. At least, that won't cost you a thing!