3 Can Cars Be Hacked? Verimatrix CSO Asaf Ashkenazi Says Yes. By Anyone

Home > News > Videogames
Mihnea Radu
We've seen people hacking car infotainment to play video games or even installing consoles in the back (Pimp My Ride). However, Tesla took things a step further when it rolled out Beach Buggy Racing 2 to vehicles last week.
1 photo
This is a new game that you can play right there on your screen, based on a mobile game by Vector Unit, in case you were wondering what happened to Beach Buggy Racing 1. But there's a twist.

While Tesla Arcade already featured a few games to help you pass the time, Beach Buggy Racing 2 lets you use the car's steering and pedals. So you bought a $50,000 gaming rig and didn't even know it.

Before you go into the game, there's a warning which tells you that you can use wheel and brake in the game. The gas doesn't do anything. However, once you've exited the vehicle, you have to be prepared for the controls to work with the car. The official teaser video they posted on YouTube, however, shows the actual car's wheels turning while the driver is playing, which is not how it's supposed to be. Obviously, doing this while your Model 3 is cruising down the highway is strictly out of the question.

From what we understand, the steering from the car's systems, allowing it to turn freely. Also, having a color-matching copy of your actual Model 3 in the game is a nice touch. But the fact that the screen is offset from your hands might give you back problems.

Tesla is also promising support for Studio MDHR’s legendary cartoon platformer Cuphead in the coming months, which will work via the pad. The update also makes these cool features easier to find, as they're no longer Easter Eggs and have a separate menu. Yeah, playing games while charging will become a thing, as if we didn't have problems with this addiction already. 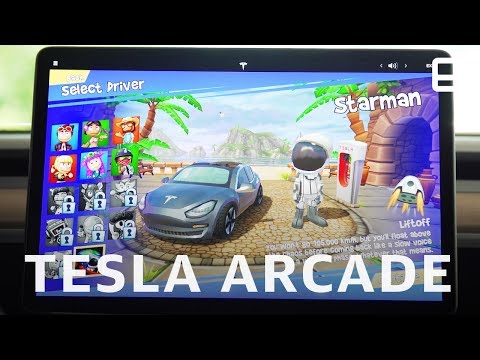