2 Tesla To Offer $20,000 Carbon Ceramic Brakes for the Model S Plaid Next Year

3 Tesla Model S Plaid Gets Gutted on the Spot in Search of a 9.0X Run, It's Eights Next

5 Tesla Model S Plaid Is "a Waste of Money" According to Edmunds Review. Hypocritical Much?
Car video reviews:
Up Next

How Do You Like the Sound of That? Porsche Drops Next-Gen 911 GT3 R Test Video

Home > News > U-turn
7 Jul 2022, 21:33 UTC ·
by Razvan Calin
Uncle Chet is back with a special episode in which he thoroughly explains what he believes happened. All in all, a bad combo of ignorance, gratuitous bravery, and underperforming equipment.
11 photos

The owner of Chilling’ with Chet YouTube Channel hit a tire wall on a closed circuit on June 25th of this year. At that point, the unanimous decision was the brakes on the car failed spontaneously. However, after a two-week recovery, Chet came out again with a rather unusual video in which he details the series of decisions and actions that led to the accident.

First of all, speed. Chet lost the car at 170 mph (274 kph), arrowing the madding Plaid straight into the tire wall. Admittedly, the Tesla S Plaid is made for high speed, but not under all and any circumstances. In the driver’s own words: “The amount of speed that I carried into that corner... into the wall, was just off the charts.”

Remember that Chet stripped his car to make it lighter. Well, as it turned out, removing the hatch door was a questionable decision. While the hatch-less car still performed remarkably well at highway cruising speeds, at over 150 mph (240kph), the pressure built in the car was so "extreme" that the window "popped out."

That happened precisely before the sharp turn in which the brakes failed. He turned his attention away from the track for “a millisecond,” and that was enough to lose it all. Again, the YouTuber admits that the Plaid’s regen braking system was working, and it might have slowed down the car to a safe speed if he had slammed the pedal a blink of an eye faster.

In his defense, the driver did install new racing brakes on the vehicle, and he claims he had them inspected and drive-worthy approved by Tesla. However, the Achilles' heel turned out to be the brake fluid. Instead of completely flushing the Dot3 before topping it up with the Dot4 fluids, he mixed them.

So, while the Dot3 stock fluid and the Dot4 track fluid can be mixed, it turns out they are not meant for track purposes.

"I agree. I'm an idiot. I should have changed it out if I pushed the car at all. At all. I should've swapped out the fluid. Now knowing that, now you guys all know that – don't even mess around with that Dot3 Fluid. (…) You, as the amateur, as the consumer, should not trust Tesla and go get Dot4; put a racing fluid in there. "

Mechanical failures aside, the accident left some marks on Chet. Broken bones and knee ligament, but it could have been fatal. Ironically, it was the absolute lack of safety equipment that might have saved his neck. Literally, as he explains how not wearing a helmet was actually better. At impact speed, the supplementary inertial forces exerted by the added weight of the helmet could have easily fractured his cervical vertebrae. So he strongly recommends full safety equipment, including neck support (HANS).

Overall, Chet’s conclusion is radical and still holds his (also several independent drive-tests backed) grudge against Tesla: “I know deep down the car has its limitations. It is not a race car. It should not have Track Mode written on that program. My point is that they’re selling a bill of goods to the public that this car can handle a track and it can not handle a track. Anybody out there that wants to debate this – get in a car, get in this car in particular, push the brakes, and you will quickly find out the car can not handle anything past one hard braking zone.”

As for the “totaled” Tesla, he plans to salvage whatever he can – if he can! – and build a “Frankenstein” out of the recoverable parts - batteries, motors, and axles. 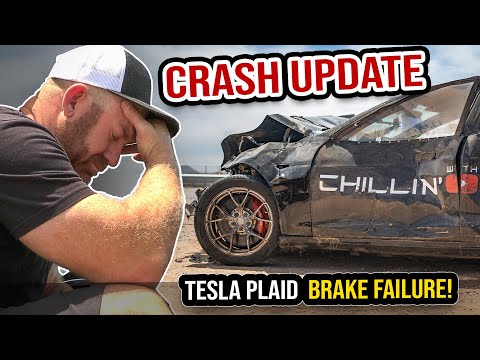