While it won’t compete for the Oscars anytime soon against the famous digital animation studio from Disney, the Ingolstadt-based automaker is making do on its promises to always look further away for the next technological innovation. When it comes to the 2021 e-tron SUV and the 2021 e-tron Sportback EVs, that means the introduction of the first animated Digital Matrix LED headlights.
11 photos

Ready and willing to expand on its electrified range, Audi is always on the lookout for that detail that will set it apart from the competition. This time around it decided to shine the spotlight (pun intended) on their next-generation lighting technology.

But what exactly is an animated Digital Matrix LED headlight, one could ask. According to the German premium carmaker, we are dealing with a new illumination technology that includes no less than “1.3 million micromirrors per headlight,” which in turn make the “LED headlights operate like movie projectors on the road.”

Wait, wait, you’re not going to see the next summer blockbuster away from the movie theater while driving home the kids from school. It doesn’t work like that, although the demonstration video (embedded below) from Audi Germany clearly gave us a few cool ideas on how to use this feature for messages addressed to other road participants (all positive, of course).

Instead, the newly introduced DML headlights feature a bouquet of five welcome/leaving animations for when the vehicle sits parked, all of them having their bespoke moving graphics and text messages that can be personalized through the e-tron's MMI touchscreen interface.

There are also other neat functions associated with the DML headlights, though not all of them can be used by U.S. consumers because of applicable law restrictions. Among them, Audi mentions the 50-meter (164 ft.) “light carpet” that precisely confines the light to the car’s lane to avoid “blinding” incoming traffic or extends left and right during cornering.

That’s the most useful, but the DML's light beam pixels that get adjusted up to 5,000 times per second can even project on-ground light arrows that can show the distracted where exactly the car’s tires are situated in respect to the lane markings. 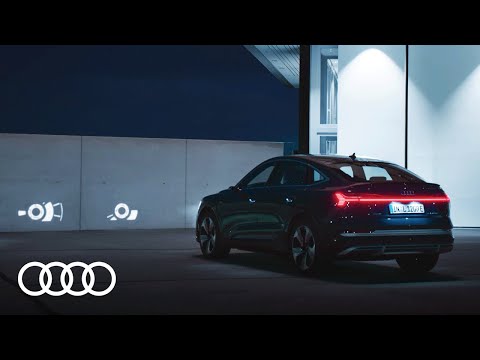