1 This Luxury Hybrid Yacht Can Be Sailed by One Person, Is Totally Self-Sufficient

3 4,600-Year-Old Solar Boat Travels Through the Streets of Giza Atop of RC Vehicle

5 Let the Outdoors In, With the Lagoon 55 Catamaran - a Real Terrace on Water
Car video reviews:
Up Next

Most people know the team at Pirelli for their ability to manipulate rubber in its entirety. But did you know that Pirelli also runs a ship-building crew!? Yup, and they’re burning rubber on all seven seas.

If you’re a fan of anything automotive, then you’ve found yourself on the right website, autoevolution. In our quest to bring to light absolutely everything about this industry, we sometimes run across weird out-of-the-blue collaborations, and insane concepts.

TecnoRib, a company licensed under Pirelli and P Zero, is not a collaboration, nor is it just filled with one-off concepts. Instead, TecnoRib has been around since 2005 with the aim of creating a new era for inflatable boats. With a start in tender manufacturing, today, the company has grown to include countless vessels, all bearing the Pirelli logo and brand name.

Two categories exist on the manufacturer’s website, Pirelli Tenders and Pirelli Speedboats. Seeing as how the word ‘tender’ sounds slow, I chose to hit the speedboat category. It’s here I ran across the Pirelli 1900, the largest and most powerful of the family.

Being the largest of the vehicles Pirelli’s TecnoRib offers, the 1900 can very well be used as an example of peak performance. As it stands, the 1900 comes in with a length of 18.5 m (60.7 ft) and beam of 5 m (16.4 ft). This offers enough room for quite the number of guests. How many? The 1900’s brochure shows that 20 guests can be zipped around international waters at once. 2,000 liters (529 gallons) of fuel and 550 liters (145 gallons) of freshwater should be more than enough to enjoy some high-speed thrills.

Now, depending on your budget and love of speed, the 1900 can be equipped with anywhere from 1,600 to 2,000 horsepower. All those diesel-produced ponies offer a top speed that Pirelli makes no mention of. Doing a bit of detective work via Google, I was able to find an average top speed of 45 knots, roughly 52 mph (84 kph). I’m not sure when the last time you’ve felt 52 mph speeds in a watercraft, but things get serious at those speeds.

The upper deck of the ship is all designed with a focus on being as open and as comfortable as possible. Guests can bathe on sun lounges and pads, while a walkthrough lounge with tables sits under the protection of a hardtop.

One feature that sets the 1900 apart from other vessels are those air chambers you see around the edge of the hull. If you look closely, I swear it looks like TecnoRib threw on actual tire segments at certain points along the chambers.

As for the cabin, guests will have the opportunity to rest at sea, thanks to multiple chambers and staterooms. If meals are needed, a fully stocked kitchen can also be completed, if the owner chooses as such. Restrooms are also available and decked out in the same fashion as the rest of the ship.

Now, there’s no mention on the manufacturer’s website as to how much one of these puppies will run you, but after doing a bit of digging, yes, via Google again, I was able to find a completed 1900 selling for over €1.5 million ($1.76 million at current exchange rates)... no joke.

But then again, what did you expect? Did you really think that a product from the minds and hands of Pirelli, a company that’s been around since the late 1800s, would be cheap? No, no, no, but you can be sure you’ll get your money’s worth.

For a moment, just imagine how your summer would be if you owned one of these vessels. Yeah. Picture yourself zipping around the local lake and the words Pirelli hitting everyone square in the eyes. 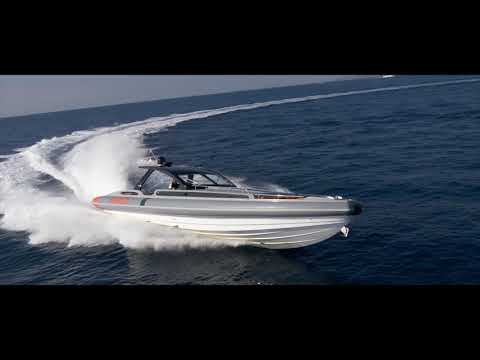