Last year, the start of the Hoonigan mini-series had the Hoonicorn as its main protagonist. But this year, Travis Pastrana is the star of the show with his 862-HP Subaru STI. With five episodes so far, he has been pretty much in control of things, but many people wanted to see a serious contender coming out.
12 photos

Travis has gone up against some serious opponents over the past five episodes, including a 1,300-HP Nissan Altima, a twin-turbo Chevrolet Corvette, a 1,000-HP Mazda RX-7, a 1,080-HP Jeep Cherokee, and a brand-new Ford GT. Even though he had some close calls at times, it didn't look like anyone can come close to how fast he is off the line. So naturally, fans were hoping to see a closer battle, and this sixth episode does not disappoint.

Because this time, the car that has been brought along for the challenge is a purposedly-built drag racing machine, which happens to be street legal at the same time. And it doesn't matter how fast Pastrana's STI has been so far because going up against a car that has been specifically built for winning quarter-mile (402 meters) races will provide an extremely difficult challenge.

Brooke Berini is the driver of the pink GT-R, and she isn't just sitting behind the wheel of a very fast car, but she's also a very experienced driver herself. Looking over the spec sheet for both cars, there's only one aspect where the STI has the upper hand, which is the overall weight. At 2,623 lbs (1,189 kg), the Subaru is almost 1,200 lbs (544 kg) lighter than the Nissan, but that's not all there is to it.

The GT-R rocks a stroked 4.3-liter twin-turbo V6 engine, while the Subaru only has a small 2.3-liter turbocharged flat-four under the hood. While both cars come with AWD, the Nissan has about 338 horsepower more than its opponent. And the STI may be fast around the Gymkhana track, but this GT-R feels most at home when going down a straight line.

Going into the race, people on site have got mixed opinions on how this might unfold. While four of them are rooting for the STI, the other six are pretty sure that Travis Pastrana has finally met his match. The first run is the usual 1,000 ft (304.8 meters) race. From the looks of it, Pastrana's reaction time is slightly better, but Brooke is quickly back in the race, and they're running neck and neck just moments after their launch.

But the onboard camera shows the GT-R pulling ahead like there's no tomorrow, making the STI seem powerless as they cross the finish line. To give Pastrana another chance, the decision is made to shorten the course to just 500 ft (152.4 meters). But this time, Brooke is on point with her launch, and she takes the lead from the very beginning and crosses the finish line first.

Travis is being given a small advantage for the third and final run, as he is allowed to launch first. With this being a short 500 ft (152.4 meters) run again, we're treated to a photo finish, in which the STI is the winner. But a long run would have just reinforced the GT-R's victory out on the strip. 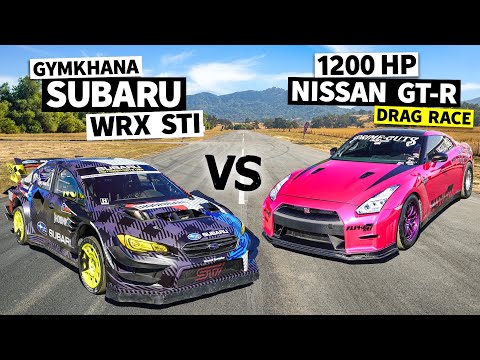