4 Pininfarina Explains Some of the Secrets Behind the Battista Anniversario

Koenigsegg Triplex: One of the Most Innovative Suspension Designs of All Time

Aurel Niculescu
While a great deal of supercar and hypercar projects take years to complete, this summer has been good with ultra-high-performance car aficionados. And there are both ICE and EV goodies to be had... soon.
8 photos

Such as Christian von Koenigsegg’s Jesko, as the Swedish manufacturer has signaled the impending start of production for the 125 examples in the series. If something like the Jesko Absolut is too exotic, then perhaps Aston Martin’s production-specification Valhalla might do the hybrid trick, complete with a 937-horsepower stable. Or, just in case these two are a bit “common” for one’s taste, there’s also the Apollo IE (Intensa Emozione) that just debuted its V12 howl in the United States.

And because the electric Rimac Nevera has been making the rounds with stellar quarter-mile performances that would even put to shame the Tesla Model S Plaid, there’s reason to be had that an alternative needed to come up soon. That time is almost now, as Automobili Pininfarina has just teased the arrival of the initial production-ready Battista on U.S. soil for its worldwide debut at Monterey Car Week.

The event takes place between August 12th and 15th, and although we still can’t see this first Battista in all of its glory, the Italian automaker promises stunning features such as “black exposed signature carbon fiber body and Iconica Blu interior highlights.” This Battista Anniversario will have the local premiere at The Quail and Pebble Beach Concours d’Elegance, and there’s also a special preview at Pebble Beach on August 12th, from 14:00 Pacific Time (17:00 ET).

Battista’s debut here shouldn’t come as a surprise, as Luca Borgogno, the company’s Chief Design Officer, will be among the judges for the Pebble Beach Concours d’Elegance competition, which should include a lot of stunning Pininfarina designs of the past.

As for the Battista, we can easily imagine it will be the center of attention. It owes that to its exposed carbon-fiber body, matching-black gloss-polished Impulso wheels, and a cockpit mixing black (sustainable) leather with Iconica Blu contrast stitching and quilted Pilota seats in Iconica Blu Alcantara. 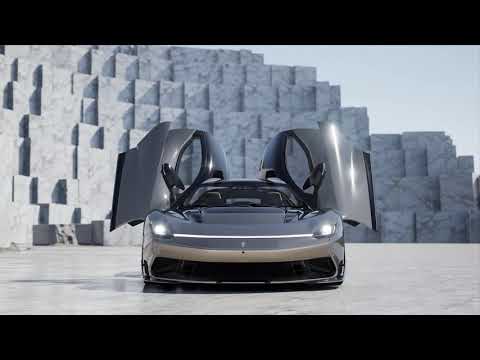