1 Nissan Could Use LG Chem Batteries for Their Future EVs

5 You Also Thought Electric Cars are Boring, Right?
Car video reviews:
Up Next

Alright, let's get one thing straight. We don't believe electric cars are for old people, but then again, you can't expect outstanding looks and devilish performances from them, especially if their badge says Nissan Leaf.
1 photo
However, the idea that an EV should look as friendly as Little Red Riding Hood is not shared by all petrolheads and to be honest, that's not to blame because we all want our cars to stand out from the crowd in one way or another.

Coming back to the mild Nissan Leaf, it's worth noted the car was never designed to resemble a Decepticon. But in today's car world, such details can be corrected with the proper use of a wide body kit, huge wheels, beefier tires and so on. You know the drill, the bigger, wider and flashier, the better.

Still, one question remains: why would you want to tune up a Nissan Leaf. We don't know, but let's have a look at how a tuning job on Nissan's EV can turn out.

For that, you'll have to watch the video below, where a massively pimped-out Leaf goes up on a platform on its way to being loaded into a transport truck. Judging by the other tuning examples we can see in the clip's background, the car was probably shown at some sort of tuning event or fan gathering in Japan.

If the silver paint won't capture your attention, then how about you take a look at those humongous Forgiato wheels with Forgiato brake calipers.

Then there's the "in your face" body kit looking like this electric was created for racing purposes. It sure gave the owner a hole in the bank account, but at least he was able to save money on a muffler tip since there are no exhaust pipes in the Nissan Leaf. 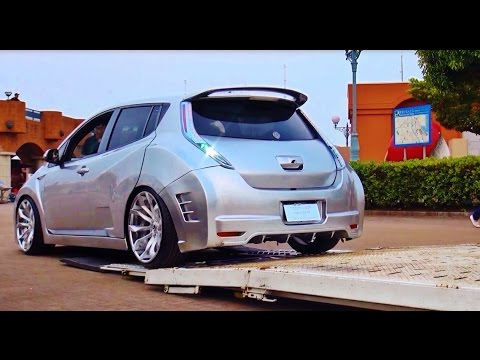