Piaggio's Latest Justin Bieber Vespa Scooter's Got Nothing on This Gorgeous, Wooden Sprint

If there’s someone who can take a pile of scrap metal and turn it into an absolute work of art is this guy right here. His latest creation is a wooden electric Vespa scooter made from an old, worn-out two-wheeler.
13 photos

These days, Piaggio is busy advertising its latest Vespa, a limited-edition Sprint scooter designed in collaboration with Justin Bieber. The two-wheeler was announced back in December and pre-orders for it will officially open in a few days (on April 18). Featuring a white paint job with flames on both the front and rear, the Justin Bieber Vespa Sprint will be available in 50, 125, and 150 cc variations. Starting at $5,000, it's not exactly budget-friendly, but I’m sure it will sell like hot cakes anyway because Beliebers are always loyal to their pop idol.

Meanwhile, in another part of the world, another Vespa Sprint has just been “released” and is already wowing the internet. It’s made of wood, it is electric, rideable, and a true masterpiece crafted by the artist behind the ND Woodworking Art YouTube channel.

I have been a fan of Truong Van Dao’s work ever since I stumbled upon his wooden Lamborghini Sian Roadster built for his adorable son, who I am sure is envied by toddlers all over the world. This kid gets to ride some of the most legendary wheelers, even though they’re not in full-size. His talented dad also made him a miniature Ferrari 250 GTO, a BMW 328 Hommage, and even a wooden version of one of the priciest cars in the world, namely the Rolls-Royce Boat Tail.

But lately, the Vietnamese artisan has started to also add some gorgeous two-wheelers to his collection. This guy can take the saddest pile of junk and turn it into gold, as is the case with his latest extreme makeover. Truong Van Dao took an old, damaged scooter and turned it into the jaw-dropping Vespa Sprint you see in the video below. 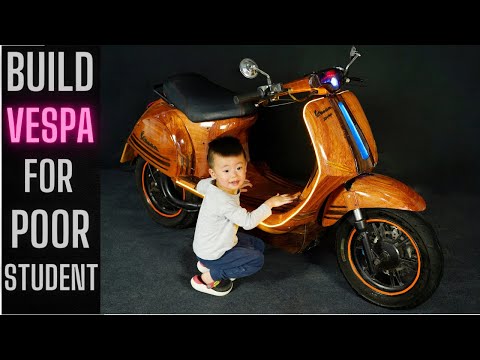