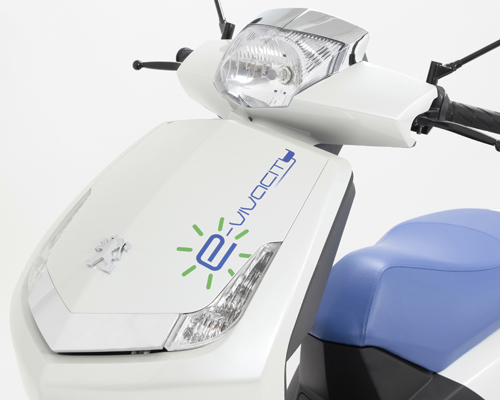 Peugeot's latest scooter, the e-Vivacity, is using specifically developed new modules of lithium-ion batteries from Saft, which reportedly make it capable of accelerations from standstill equal to those of many 125cmc models despite being a 50cmc equivalent model.

The Saft battery system powering the e-Vivacity provides power that is particularly appreciable for ease of insertion in traffic flows.

By integrating two Saft lithium-ion battery modules each developing 1kWh, Peugeot Scooters has been able to provide its latest model with total power of 3kW at 6,000rpm and 60km of autonomy assuming a constant speed of 45km/h (28 mph). After equipping the 3,000 first generation Peugeot electric scooters, the new Saft batteries take up less than half the space, and weigh less than half as much as their predecessors.

They offer numerous other benefits. They need no maintenance and can be fully recharged at least 1,000 times without any deterioration in their performance. They have been designed to last at least ten years and allow the e-Vivacity to clock up 40,000km (24,855 miles) and reach the same top speed as equivalent two-wheel vehicles equipped with 50cmc combustion engines.

The battery modules designed and manufactured by Saft are equipped with an electronic battery management system developed using the international IEC 61508 standard risk reduction procedure and thereby ensuring an optimal level of safety for the battery system.

The Saft battery system equipping the e-Vivacity is very simple to recharge. The user only has to connect a cable lodged under the seat to a domestic 220V plug or an urban charge port. A complete recharge requires between five and eight hours depending on whether the vehicle is equipped with one or two chargers. If with two, then 80% of the full charge can be obtained in just three hours. Also, partial charges do not affect the batteries' useful life.